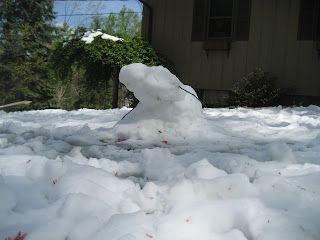 One day after reading climate change means that Pennsylvania will in 50 years resemble Alabama it snowed like Alaska and left me in a state of confusion.
As recent snows go, this one had catastrophic aspects. We got about a foot of the heavy stuff. Trees and power lines were downed, schools were closed, all our lives disrupted.
And I felt euphoric.
Talk murky climate change statistics all you want, but when a guy like me is cheering for winter, chaos really reigns. Me rooting for winter is like Mitt Romney rooting for $2.15 a gallon for unleaded.
In advance of our Alabamian atmospherics, let’s call it cotton-pickin’ crazy.
I summed up my all-consuming hatred for winter in the midst of record snowfall from February 2010 when I wrote this post, “All Snowmen are Abominable.”
What’s odd is we didn’t get winter until spring. And it’s gone in 24 hours.
I’ve had hangovers that have lasted longer than this winter did.
I’m reluctant to opine on global warming for fear of instigating the mercurial hot heads who contend against all reason that nothing weird’s happening with the weather. They are Global Warming SCOPEtics, people who believe we can still use fossil fuels with reckless abandon and everything will still wind up all green and minty fresh.
I’m not so sure and I’m starting to feel nostalgic for something I used to hate.
I fear Monday was the last day of winter. And by last day of winter, I don’t mean this winter season, which was non-existent. We had maybe three snows since October, none of them at all consequential.
I mean the last day of winter. The last day of snows. The last day of closed schools. The last day of snowball fights, snowmen and snow angels. The last day of sled riding.
As an optimist, I try and think of the bright side of climate change -- and by bright side I mean SPF 451.
You’d think year-round summer should improve my golf scores, but I’ll likely spend more time tending to the non-native kudzua overtaking our dogwoods so it might be a wash.
Worst of all, I’ll spend a lot of time regaling youngsters with my recollections of what the world used to be like.
And I’ll think of yesterday.
Thanks to the most efficient school closing announcement system in history, I knew something was up at 5:15 a.m. That’s when all three phones in the house started going off like the government was warning of a hostile alien invasion.
It’s like the Greater Latrobe School District wants all the parents of the children they teach to die from pre-dawn heart attacks so we won’t be around to meddle with their mission.
I see a lot of sense in that.
It wasn’t like that when I was a kid. We’d huddle around the radio and listen to long listings of school closings the way I guess Vietnam-era 18 year olds would listen to the war draft lottery.
It would be a mistake to conclude I equate surprise childhood radio announcements that school would be closed with the same emotions as when I learned I was going to become a father.
News of pending fatherhood leads to mixed feelings. Learning school is closed leads to pure jubilation.
We try to preserve that sensation for our daughters. We awoke them yesterday like it was every other school day. They marveled at the snow outside and watched the morning news rapt to see if their school was listed for delay or closure.
“There’s no way they’re closing schools today,” I lied.

Our kindergartner’s never had a snow day. When she saw her school listed “CLOSED,” her face bore the same expression it did December 25 when she came out and saw all the presents under the tree.
If it was our last winter day, we made the very best of it. We had snowball fights, built snowman, made popcorn and snuggled in front of the fire while we watched The Muppet Movie, the vintage 1979 one.
The high today will again be in the 50s and the once stout snowman is stooped and assuming the consistency of tears.
Our one-day winter is over.
Now, if experts are correct, it’ll won’t be until the year 2050 when my lawn is once again shaded white.
Only the white won’t be from snow.
On that day I’ll look back at the days of my youth and wish I wasn’t in the land of cotton.
Look away. Look away.
Posted by Chris Rodell at 11:59 AM