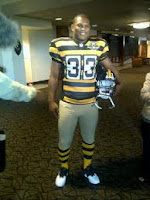 Check it out: Steeler Tike Redman modeling the ugliest jersey known to man. Fans are buzzing over the most hideous jerseys in history. It's so egregious I feel compelled to do a mid-week rerun of my bashing the phenomenon that first ran in Oct. 2010.
Prediction: the game they wear these unis will set listener records for radio stations where fans will flock so they don't have to see these things in hi-def motion.
My life curse is that I, a man who can’t even earn a dime for himself, sees how the already filthy rich can grab even more loot.
Take this past weekend. I spent $75 to attend a professional football game between my hometown Pittsburgh Steelers and the Baltimore Ravens.