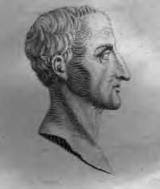 It was the Roman poet Sextus Propertius who is said to have given the world the first notion that absence makes the heart grow fonder when he wrote, “Always toward absent lovers love’s tide stronger flows.”

That his name endures in the canon of great poets more than 2000 years after his pre-Christ passing is remarkable, especially for a poet inept at composing even simple nursery rhyme.

My appreciation of poetry is sadly deficient and I admit when I saw the name Sextus Propertius my first thought was, man, I’ll bet it’s funny when they read his name aloud in high school English.

But his initial wisdom persists, as I am reminded whenever I return home from a jaunt.

Happened again Monday when the 5-year-old toddled off the school bus and dashed straight into my arms. I’d been away seven nights and had just returned the previous evening with a bagful of girly goodies.

“Daddy,” she said, “when we get home will you help me change into the new shirt you brought me and then come outside and play with me?”

It was so beautiful and heartfelt I decided right then and there -- to hell with my busy schedule -- I was going to be 15 minutes late for Happy Hour.

Father of the Year Award, here I come!

Who says I’m not sentimental?

I’m becoming aware that I’m loved most by the people who see me least.

I suspect that’s the way it is with most of us. The people we see less often recall the laughter and forget the pettiness. An occasional wisdom will resonate and fleeting bone-headedness will be dismissed. Embarrassing personal problems like chronic and uncontrollable flatulence are mostly gone with the wind.

The trick in life is being around enough to remind loved ones you’re part of their lives while being absent enough for them to miss you even a little.

I have momentarily achieved that balance.

Right up until I vamoosed the girls were all raring for me to go. They complained about my constantly being around, my insistence on watching the Penguin games instead of their Disney Channel shows, and they revolted at the olfactory offense that’s part of my lifelong struggle with chronic and uncontrollable flatulence.

And for me a road trip is a traveling two-fer. The kids miss me and I get to make a host of new friends because I’m becoming a master at the art of fleeting first impressions, at least among drunken strangers, my sweet spot demographic.

I think I’m popular with those kinds of folks because I’m convivial, never ask pesky questions that don’t involve another round of liquor, and the only time anyone hears me going bitch, bitch, bitch is if I’m telling a story about a successful dog grooming venture.

I like to think these methods would work as well making friends with sober strangers as it does with drunken ones, but it sounds too boring to bother trying.

Of course, given these preoccupations with being too present too often, I often fret if I blog too frequently or the posts go on too long.

So I think I’ll quit now and allow you to enjoy basking in the goodness of me being gone.

Plus, I need to catch up on those 15 minutes of Happy Hour I lost Monday when I was out playing with the kid.