Re-Run Sunday: Horsin' 'round in the ol' breed barn 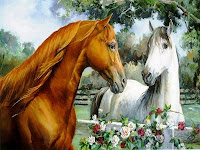 In honor of Derby week, I'm re-posting this 2009 piece about the randy fate that awaits all champion horses. They are used for base reproduction purposes. Sounds like it beats what Michael Jordan's been doing since he retired.


For what it's worth, I like Bodemeister for his eye-catching win at the Arkansas Derby.

Those are the kinds of numbers that get pulses racing. Jess Jackson is the filly’s owner. One report described him as the Kendall-Jackson “wine magnate,” a term they left undefined. I know it's a different spelling and all, but I still like to think the description bottles of Cabernet and Merlot fly off the shelves and bond to the 79-year-old entrepreneur whenever he strolls down the aisles of the liquor store.