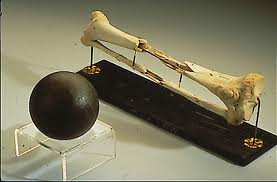 We had some unsettling local news last week that had us all contemplating ghoulish fates. A young man was riding a motorcycle that hit a pole and sliced his leg off below the knee.
Everybody read all the papers and asked all the questions: how will he cope? Will he persevere? How will he react to the grueling rehab?
In essence, everyone wanted to know if a de-foot would lead to defeat?
I think not. It’s a terrible result, but he’s lucky to be alive with many productive years ahead of him.
My question was less existential: what did they do with the foot?
I’m vicarious about everything that happens to anyone else. How would I react if the same thing happened to me?
So when I hear that someone loses a foot in a mishap, I put my feet in his shoe.
First of all, I’d want a proprietary say over its disposal.
The assumption is they incinerate it as medical waste, a terribly callous judgement of a body part that’s been with a man or woman every step of the way. Well, I guess every other step.
The thought would have infuriated Capt. Augustus McCrae from “Lonesome Dove.” He woke up after a difficult ordeal in Indian country to find a drunken sawbones had removed and disposed of his blood poisoned leg.
McCrae was angry because he fancied using the bones for a walking stick, which when you get right down to it is a rather redundant mission for old leg bones.
I’m thinking more in the lines of jewelry.
I think I’d make a necklace out mine. I imagine it would help me win a fortune in bar wagers about my yoga-like boast that I could put my foot around my neck without getting up from my bar stool.
But I could see my family objecting to me showing up at things like church and school assemblies with my neck adorned with my foot.
So that would leave the burial option. I’d find a shady place down by the creek and have a solemn little ceremony praying my foot gets to heaven enough ahead of me that it could save the rest of me a place, assuming, that is, my sole has some soul.
Then for the rest of my life I could commune with it like Union Major General Daniel Sickles did with the amputated leg he lost to a Rebel cannonball at the battle of Gettysburg. After the war he presented the leg bones and the destructive shot to what is now the National Museum of Health and Medicine in Washington, D.C. He’d visit them both every year on the anniversary of the amputation and make what I guess would be fascinating small talk.
It’s a pity those visits pre-dated reality TV by about 140 years.
It must be the organ donor in me that brings life to these morbid thoughts. When I die, my entire body -- eyes, heart, kidneys, liver -- the whole shebang will be up for grabs.
(Note: informing friends that they may one day help themselves to one of your vital organs doesn’t make them any more likely to loan you $20.)
I’m hopeful that one day they’ll even be able to reanimate parts of me so that my limbs will be grafted onto the needy.
In fact, this isn’t as far out as it seems.
A friend of mine said body part disposal was no longer what I guess you’d call a knee-jerk reaction among medical professionals. In fact, she said there are more medical donor banks than much of the public realizes.
Besides common blood banks, there are tissue banks, organ banks and even bone banks.
She said bones from accident victims -- spare ribs? -- are being preserved for worthy research purposes.
So now I’ll know not to snicker if I ever hear someone say they’re going make a late night withdrawal from the old bone bank.
My curiosity was piqued and I momentarily thought about calling a bone bank to learn just what kind of ground-breaking work they’re doing.
But I decided against it. They’re probably too busy to deal with my silly questions.
And it’s a sure thing our nation’s bone banks are staffed with skeleton crews.
Posted by Chris Rodell at 1:25 PM