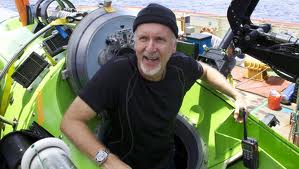 News that some of our most prominent and wealthy men are planning a deep space venture to obtain precious minerals found right under our feet shows that even balding men can act hair brained.
And, take note grammar snobs, the Oxford English Dictionary says “hair” brained is now accepted along with its more sensible predecessor, “hare” brained.
In fact, what James Cameron and Google execs Larry Page and Eric Schmidt and Planetary Resources are planning sounds like a Bugs Bunny sketch.
They are intent on spending billions of dollars to fly robots into outer space to mine from asteroids a substance that any kid with a shovel and a little luck can find right beneath their sandbox.
They believe the 1,500 or so asteroids that pass near earth contain gold, platinum and other precious metals that are one day bound to wind up in the shafts of pricey sporting good equipment for the country club set.
Planetary Resources co-founder Eric Anderson said he is confident the venture will be profitable.
“Before we started launching people into space as private citizens, people thought that was a pie-in-the-sky idea,” he said. “We’re in this for decades. But it’s not a charity. We’re going to make money from the beginning.”
I only wish the groups aim’s were to retrieve a big slice of asteroid pie. At least that would benefit someone hungry.
They know if guys like Trump will pay $1,600 an ounce for gold, then they’ll pay five times that to boast of buying a gaudy bauble minted from space gold.
Is anyone wealthy doing anything to help humanity these days?
As noted in this August bash, “Steve Jobs: American iCon,” we live in a time when the people most capable of helping mankind are becoming the least likely to try. They tinker with their toys and fritter away their riches on selfish pursuits.
In this regard, no one’s gone more off the deep end than Cameron, and by “deep end,” I’m referring to his recent jaunt to the bottom of the 6.5 mile-deep Mariana Trench, the deepest part of the Pacific Ocean and the last place to puddle if Earth ever runs out of water.
That’s where Cameron recently went for what he said were research purposes. He brought back floor samples from depths scientists say no living being has ever trod.
I’d like to hear what the scientists have to say if the samples include a perfectly preserved Titleist and a bent putter.
I don’t have a problem with rich people living adventurous lives. In fact, I encourage it. I think all mankind benefitted when men like the late Steve Fossett would attempt to balloon around the world.
I know I felt better watching the news and learning violent storms forced Mr. Fancy Britches to ditch in the Indian Ocean and that, at that very moment, he was dodging maneater sharks while I sitting at the bar enjoying a fish sandwich.
It’s not self-indulgence to which I’m opposed. It’s boredom.
Men like Cameron need to stop hiding behind the tedious guise of research and just have their audacious fun. Trust me, we’ll all watch.
Cameron and the profit-minded sages at Planetary Research ought to announce plans to by the year 2020 -- destined to be a great year for visionaries -- lasso an asteroid and personally crash it into one of our many godforsaken square states out West.
Thousands of common treasure hunters would pay Planetary Resources big bucks for prospector rights that would allow them to search for sizzling space bling splashed all across the desert.
Best would be the live feed of Cameron trying desperately to make a safe exit from the asteroid before it cratered into the desert.
That’s one flick I’d pay the premium to see in 3-D.
I know what you’re thinking, “What a hare-brained idea.”
Maybe, but no less hare brained than using the pretext of an earthly jewelry shortage as a silly pretense to play a billionaire’s version of “Lost in Space.”
Lost in space?
We can only hope.