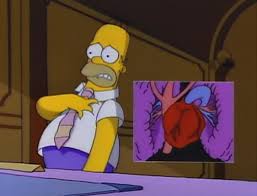 My plan to engineer my own death through massive cardiac arrest has been deep sixed since I realized my heart just isn’t in it. And you can’t nurture a future heart attack without a whole lot of heart.

I guess this mindset is common for people who are given an unfortunate diagnosis or hit with a sudden situational forlornness. We read the fateful end game and say, no thanks, and we try and construct a tidier off-ramp.

A lovely widowed friend of mine told me all about it. She’d lost her dear husband while he was in his early 50s. It devastated her.

“Right after he died, I started smoking two packs a day. I hit the bottle every night. I was living recklessly because I wanted to die. I had no reason to live.”

I realized I wasn’t as committed as she’d been when she asked what other ill-advised habits I’d adopted and all I could come up with was being less fanatical about flossing my teeth.

It’s true. Nearly all my life I’ve been a teeth-flossing fool. When I heard I have Parkinson’s, I thought, “What’s the point?”

Unlike my friend, I wanted my death to be gastronomic in nature.

And let’s pause for a moment to marvel how we live in a land of such plenty that over-eating is a viable death option.

I figured it would take 10 years to nurse a real whopper of sufficient fatality. I’d be 65 and the worst of my symptoms would — cross your fingers — be yet to flare. So ever since February, it’s been all pizza, fried chicken, ice cream and bacon! Bacon! Bacon!

Salt bad for the heart? I put salt on my cereal.

As many of you know, I’m not inexperienced at the task.

I once gained 20 pounds in one week on The Elvis Presley Diet.

The inspiration? A thousand bucks and everlasting glory from editors of National Enquirer who craved fresh ways to even in 1994 include Presley in their bold-faced headlines.

The idea came to me when I was watching a cable program featuring interviews with the women who killed The King: his cooks.

I remember one saying, “I’ll never forget walking into his bedroom and seeing Mr. Presley in bed eating a pork chop sandwich. He had butter dripping off his elbows. He said, ‘Man, these sure are tasty. Bring me six more!’”

I wondered what a diet like that would do to an otherwise normal adult male. I submitted the idea to my editor and he green lighted it in an instant. He said the goal was for me to gain 10 pounds.

We spent nearly $1,000 on groceries and began cooking meals from Brenda A. Butler’s official Elvis cookbook — sing it with me — “Are You Hungry Tonight?”

In the end I gained 20 pounds in one week.

So what made me shy away from the killer diet when I thought it might have a practical application in nurturing a fatal heart attack?

Part of it is vanity. I was/am developing a pot belly and I began/am beginning to resent it. I may be suffering from a degenerative neurological disorder with the grim potential to send me to an early grave, but I want to have an open casket so people can with some shade of honesty remark that I look good for a stiff. And I’d rather that than have an open casket because my belly is too big to close the lid.

The other part is an unabashed will to live. I’ve been dealt an unfortunate hand — happens to many of us sooner or later — but I still revel at being among the living. I yearn to grow old or at least older with the good-natured notion that a cure is just a day away.

It’s the same reasoning why so many line up to play the lottery.

Will I resume my fanatical flossing? Nah. I’m kind of done with that. I’ll just floss when I feel like it.

The will to live is strong.

The will to floss, not so much.