Boston big shot tells me about his plants; I tell him about mine 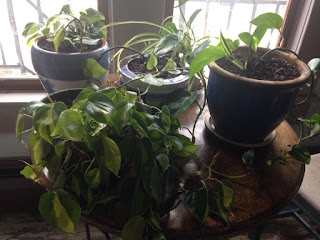 Whatever regard you have for me may be diminished by my confession that last week I was rude to a friendly stranger.

Now, I was raised better than that. I was taught to be friendly to my fellow humans no matter his/her/other’s race, creed, religion or political leanings. And in these fraught times that last one takes gargantuan restraint, doesn’t it?

In my defense, the guy did admit to being a fan of the ball-deflating, pretty-boy lovin’, ref-whining, Spygate-defending New England Patriots.

It’s too much for even a liberal like me.

So when he said he owned four plants, I blurted out I had five.

Well, 10, if you count branch plants.

He said his plants were in Memphis, Nashville, Ann Arbor and New Hampshire, his ultimate destination. He was flying home from Memphis when storms and curiosity led him to land at the Arnold Palmer Airport for an overnighter in Latrobe.

He asked about the location of my plants.

That was true. Five of them were on a single table upstairs in the hall outside my office (above).

The Patriots may have been the dominant team in the NFL for the past 20 years, but that wasn’t helping their fans differentiate between the definitions of words like “plant” and “factory.”

His said his plants produce specialty steel for the auto industry.

I didn’t feel the need to one-up him once again, but my plants are involved in the process of photosynthesis that results in the production of oxygen essential for human respiration. So without my plants there’d be no need for his.

I was already feeling petty trying to top the Brady lover when he said something that made me feel instantly worse.

“Yeah, I flew out of my way to come here,” he said. “I’m a big Arnold Palmer fan and always wanted to visit Latrobe. I asked a guy at the airport where I could go to hear some good stories. He told me to come to the Tin Lizzy.”

I could feel myself getting smaller as I awaited the inevitable question.

“Did you ever meet him?”

The bartender’d heard the whole thing. He reached up and grabbed a copy of my book and slid it across the bar: “Not only did he know him, he wrote this book.”

“So, you don’t really own plants?”

I told him I really did. Just not the kind he meant.

It was the beginning of what may become a beautiful friendship. I told him all my best stories, he showed me pictures of his new grandson and together we toasted each other’s futures.

It was all going fine until after I took him upstairs to show him my office and sell him a book. I began to suspect maybe he’d been the liar all along.

For a guy who bragged about owning four plants across the Eastern United States, he didn’t show the least professional curiosity in the ones I had sitting on the table outside my office.

Made me glad I didn’t ask him if he was interested in checking out the branch plants.

I don’t think he’d have understood that when you got down to the root of the thing all plants in one way or another are branch plants.

Lies I told the Post-Gazette

Lying about my height on driver’s license