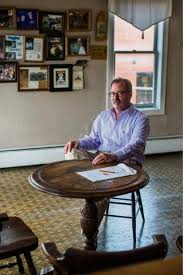 I can’t help but wonder if worshippers at a Murrysville Presbyterian church who’d filled the pews eager to bask in the word of God felt spiritual distress when the Almighty was pre-empted by the word of Rodell.

A pastor told me he’d devoted his Sunday sermon to my Arnold Palmer book.

To me, it would have been like expecting the victorious team to douse you with a big jug of Gatorade and instead having some weak tea spilled on your sleeve when the clumsy towel boy trips.

I learned this on a Friday night at the Tin Lizzy when it seemed every stranger in the building expressed a desire to meet me and fill my head with ego-inflating praise.

It went so long and was so elaborate I barely had time to finish my first beer.

First were the sisters, a pair of local sweethearts I’d somehow never met. The waitress said they’d just ordered some Tin Lizzy pizza and were hoping to meet me and buy books. Could I stop what I was doing for a quick chat?

Understand, I was engaged in drinking beer at the bar and there have been many nights — hell, there’ve been many years — when the answer would have been, no, I can’t possibly stop what I’m doing. But at 55, that adolescent phase seems to be a bit on the wane. And after so many years of being professionally ignored, I’m preferring to hear people say nice things about me and my work rather than constructing a Force 9 hangover.

So we’re talking and laughing and having conspicuous fun when a stranger at table 4 interrupts. Now, any interruption in that setting is rude and should not be encouraged, but the interruption, spoken enthusiastically in a near shout, involved praise for me so I was all for it.

And this was coming from a guy who knows a thing or two about good books. I’m talking THE Good Book.

Yes, my new friend said he was a Presbyterian minister and felt parts of the book were useful tools in his everlasting quest to save souls of Murrysville sinners.

I guess, gee, that’s the most flattering review yet.

It went on like that for the next hour. People who’ve read the book or heard me talk are coming to the Tin Lizzy to meet me and buy more books. Sold eight that night.

I left sober, but feeling oddly buzzed nonetheless. Who knew flattery could be so intoxicating?

It happened again yesterday and this time I was in a motor vehicle.

A woman who’d heard me speak at the Murrysville library (I’m on a real Murrysville roll) was calling about booking the Tin Lizzy banquet room to hear my stories (see first link below).

“You were wonderful!” she said. “I could have listened to you talk for hours. You have such an engaging manner and such a great sense of humor. I never …”

I interrupted here and asked her to start over and word-for-word repeat exactly what she’d said.

Val was driving and I wanted to switch the phone to speaker.

She said she wants to bring 15 to 20 women to hear my stories November 16. I’m hopeful this could catch on.

You know, I heard from a lot of publishing industry experts who said the book I proposed — one that has less to do with golfing and more to do with living — would fail. One said the book should detail precisely which clubs Arnold Palmer used to win which tournaments.

But I stuck to my guns, an awkward stance for an avowed pacifist.

Only a handful of golfers will ever know what it’s like to golf like Arnold Palmer did, but the value of this book is it shows how all of us can live like he did.

No, it’s not The Good Book.

But it ain’t too bad.

Time to change town name from Youngstown to Palmerville!

Am I celebrity? Um, nope

After examine a few of the blog posts in your web site now, and I actually like your manner of blogging. I bookmarked it to my bookmark website checklist and shall be checking again soon. Pls take a look at my web site as well and let me know what you think. casino play