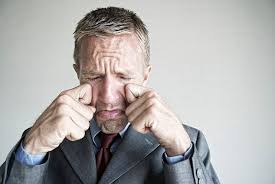 When you read that I CRY, I’m not talking blubbering. My composure remains intact. The last time I was that out-of-control bereft was January 12, 2004, the day my father died. I was devastated. Cried like a baby for hours.

What some guys won’t do to get out of paying up.

This is true. The only other time I remember crying that hard was October 11, 1972, the night Bob Moose of the Pittsburgh Pirates threw a game-ending wild pitch to hand the National League Champion Series to the hated Cincinnati Reds.

I was 9 years old. I cried and cried and cried. In fact, I didn’t stop crying until October 9, 1976. That was the day my Dad told me Bob Moose was tragically killed in an automobile accident on his way to play golf. It was his 29th birthday.

I like to think the one had nothing to do with the other, but I was a heartless little bastard so who knows.

These days when I say something made me CRY, I mean it made me misty, that I had to wipe tears from my eyes, that I was becoming sentimental. I’d maybe CRY harder, but I’m shy about letting my daughters see me cry over things like department store commercials.

Really, with the world being such a mess a handy line I use about drinking could easily apply to crying if you just swap the key words: “It’s not surprising we drink/cry. It’s surprising we ever stop drinking/crying.”

But this isn’t about big things. This is about relatively little things, things like car repairs and disappointing afternoons at the movies.

What makes you CRY? Here’s a little list of things that had me feeling sentimental and some stuff that didn’t at all …

CRY : The Elton John commercial. Have you seen this? It’s magnificent. It’s a poignant summation of Sir Elton’s entire performing life told through one indelible song. It’s his life. It’s “Your Song.”

CRY: My mechanic says my 2007 Saturn Vue with 205,692 miles needs more than $10,000 in repairs before it’ll pass inspection. He’s exaggerating — I think — but it’s done. I don’t know where I’m going to get the dough for a new ride. I don’t know why I’ve held onto it so long. It’s been a good vehicle, sure, but it’s the first car I’ve owned I never had any sex in. It’s a sad kind of milestone. Of course, there’s still time to rectify that status. It’s such a low class idea I know I’ll have to butter up the missus to get her to even consider it. And I’m not being metaphorical. The upholstery is already shot so a little bit of butter won’t make much difference

DIDN’T CRY: My old friend Chuck Mincey’s 2018 was dominated by a stroke and two-brain surgeries. That he’s having brain trouble shocks me. The man has one of the best brains of anyone I’ve ever known. It’s always been quick, witty and original. I didn’t feel like crying when I read a poignant note of gratitude to those of us who’ve prayed for him, but I did tear up when I wrote: “God Bless you, Chuck, because He sure blessed me by having you as a friend.” Why I didn’t cry at his note, but nearly did at my own is more evidence of my massive ego. If my income ever catches up to my ego, even Trump’s going to have to watch out.

DIDN’T CRY: Thinking of all the ghosts around the Thanksgiving dinner table made me sad. Moms, Dads, Aunts, Uncles, Grandpas and ‘mas — so many gone. I guess it’d be sweet to shed tears over the dearly departed, but I’d be faking it. I loved them each fiercely while they were alive. That ought to count for something.

DIDN’T CRY: Many of my most tasteful friends urged me to go see “A Star Is Born.” “You’ll laugh, you’ll cry,” the said. I did neither. I enjoyed the performances, particularly Lady Gaga, very much. And Val and I both like Bradley Cooper, her for reasons more carnal than mine. Maybe I already sensed the way it was going to play out. Most people really like it. Maybe I'm nitpicking.

CRY: The Fred Rogers documentary, “Won’t You Be My Neighbor,” made me cry for multiple reasons. It was joyful, it was sad, it was profound, it was hilarious. It’ll, for sure, make most critics best-of. Truly, it’s wrong to call Mr. Rogers a role model. Fred Rogers was a saint.

DIDN’T CRY: I never cry when I hear the peerless Roy Orbison singing “Crying,” but I understand why someone vulnerable might. It’s a beautiful song about deep sadness.

CRY: Dropped a hammer on my toe. Still hurts.

RIP Mom; why feeling sad is so elusive