And Latrobe's best hugger is? Notes from my hug-filled week 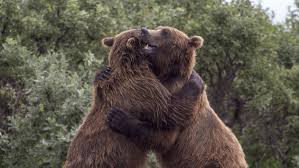 That so many women are popping up out of nowhere to give me long soulful hugs makes me glad I last week didn’t reveal I have leprosy.

If I’ve learned anything from the past week since I declared I have Parkinson’s Disease it’s that it feels good to tell people you’re not well. They tell you they’re going to pray for you, offer rides and household assistance and just hug the heck out of you.

They’ve hugged me in the bar, on the sidewalk, in the grocery store, the post office — all over the place.

All hail the hug!

It can do all that and it can do something even more magical.

Most human intimacy begins with a simple hug, the most notable exception being the transactional intimacy with your common hooker usually proceeded by the mood-killing question, “So, how much?”

The stormy passions that led to the conception of most of our children begin with loving hugs.

I tried to put all this far, far out of my mind when I was in the plumbing fixtures aisle at the True Value hardware when I was hit with a hug so surprising I nearly dropped my new plunger.

It was enveloping. It was supple. It was warm. It was enduring.

I never knew Burt could excel at hugging like that. Belching, yes. Deer-gutting, sure. Hugging, no.

How wrong I was. I’m not using his real name because I don’t want to embarrass him. But for my money Burt’s the best hugger in town. This bear-like man wrapped me up in his arms and literally lifted me off the ground as he whispered soul-stirring encouragement.

I’ve been pleased by the number of my male friends who’ve stepped up for quick manly hugs. Hugs are literally touching. And to have male friends old and new express such encouraging affection really moves me.

See, I live in a part of the nation where many heterosexual men still feel awkward putting their arms around another man in a place where other men might see it.

Places like the hardware store. Get busted hugging there and, guaranteed, you’ll hear three “Brokeback Mountain” jokes before the manly uncoupling.

Maybe it was what he said that made the hug seem so extra special. Because what he said to me is what in these challenging times we all need to hear.

“You’re going to be all right. Stay positive. Don’t give up. We’re all praying for you. If you need anything — anything at all — just let me know. We’ll take care of you.”

Isn’t that beautiful? Feel free to imagine great, big Burt saying those heartfelt words to you with his arms wrapped around your quivering torso.

That’s why I felt so bad that I'd giggled hysterically throughout this whole emotional interlude. It wasn’t I felt awkward or weird.

But I’m also about a foot shorter than Burt and his beard kept tickling my bald spot.

• Thanks to all of you, my friends, who took time to express concern and encouragement over my diagnosis. If I didn’t respond, I apologize. It was as overwhelming as it was touching.