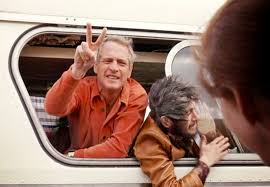 Our 16-year-old had a friend over to watch movies. I asked what she had in mind. She said she hadn’t decided.

“May I make a suggestion?” I asked. “Watch ‘Lonesome Dove.’”

She’s too polite, for now, to swear at her old man, but her sarcastic response verged on spicy dialogue you’d hear in a Tarantino flick. I’m not sure what they watched, but it’s a safe bet the movie won’t be in heavy cable rotation 27 years after its release, as “Lonesome Dove” is and will remain in perpetuity.

If I see it's on, I always click right to it and settle in for a scene or two. If it’s within 30 minutes of the scene where Gus and Call hang Jake Spoon, I sit and watch until the doomed rascal spurs his horse. It’s that good.

I’d intended to write about movies before the Oscars, but I either got busy or distracted watching “Lonesome Dove” for the 129th time. So here’s some thoughts on recent and otherwise relevant old movies, with most of it about the great Paul Newman.

• Last week was the 40th anniversary of the release of the movie “Slap Shot.” They had a cast reunion in nearby Johnstown where it was based. It is one of my favorite movies starring Newman, one of my favorite actors. The famous bus moon was filmed on the town square in nearby Ligonier, known for its presumptuous hoity-toityness. I almost showed the mooning scene to my daughters as a point of local interest, but was seized by a rare burst of parental propriety.

• “Hell or High Water” was maybe my favorite movie from the last year. It’s a modern Western, but the dialogue — real redneck Shakespeare — is crackling perfection. Impeccable soundtrack, too. I only know a handful of people who’ve seen the Jeff Bridges/Chris Pine/Ben Foster film. I think the title’s too cliche to snag interest.

• Recently watched “The Princess Bride” with the girls. Filled with charm and wit, it’s a family favorite. Many people know it’s a Rob Reiner film (FYI: Meathead turns 70 on Monday!) but fewer know the soundtrack was composed by none other than Mark Knopfler. He’d taken a Dire Straits sabbatical after being overwhelmed by the international success of  '85's “Brothers in Arms” and was looking for something quirky. This is one of those movies that makes me impatient to be a grandpa.

• “Lonesome Dove” stars Robert Duvall as “Augustus McCrae,” Tommy Lee Jones as “Woodrow Call” and Robert Urich as “Jake Spoon.” The mini-series is based on the 1985 Larry McMurtry novel, but started as a Hollywood screenplay pitched with Jimmy Stewart as McCrae, John Wayne as Call and Henry Ford as Spoon. It was nearly made but director John Ford advised Wayne to reject the script. Imagine “Lonesome Dove with Jimmy Stewart, John Wayne and Henry Fonda. Wow.

• While very few people saw “Hell or High Water,” mere handfuls have seen best actor nominee Viggo Mortensen in “Captain Fantastic.” I’d never even heard of it when Val brought it home and practically duct-taped me to a chair to watch it. I hated the first 10 minutes, but loved the last 90. Really fun, offbeat movie that jabs at many of our sacred cows.

• Interested in “Slap Shot” back story? My buddy Paul Peirce wrote this great story about Ligonier’s racy role in the classic. He says we need to see “Florence Foster Jenkins,” the film for which Meryl Streep was just nominated for best actress and we soon will. I do not disregard Paul’s recommendations when it comes to funny.

• My reverence for the McMurtry’s Gus McCrae character is such that I was insistent we name one of our children Augustus — and we have two females! I didn’t get my way with that, but he’s the reason the protagonist in my book, “The Last Baby Boomer,” is named McCrae. Why is he named Martin? It just seemed to fit.

• I was talking in the Tin Lizzy last night with a young couple who’d attended the “Slap Shot” festival in Johnstown. I mentioned how I believe Newman’s best movie is “Cool Hand Luke.” They’d never seen it. I told them, “Grab a 12-pack. You’re coming to my house right now.” I was kidding, but the day when I’m free to provide that kind of vital education to innocents the world will be a better place.

• Coincidentally, I cooked spaghetti dinner last night with “Newman’s Own” Sockarooni Sauce. It was delicious. His namesake charity also makes salad dressing, salsa, barbecue sauce, licorice, mints, mayo and nearly a two dozen other food stuffs. Founded in 1982 with the motto’d intention that “100 percent of profits” go to charity, the company has given $485 million to needy causes. “I’ve always been lucky in life,” Newman said. “Sharing one’s good fortune with others is just the right thing to do.”

• Before entering the World War II as a turret gunner above the Pacific, Newman briefly attended Ohio University. I write about my experiences there in the “party boy” link below.

• Paul Newman was on Richard Nixon’s 1971 “enemies list,” but Charles Manson wasn’t. Know who else was on it? Tony Randall! I promise to dig into this one day.

• And, finally, here’s a song in search of a soundtrack. It’s Tom Russell’s “Ash Wednesday.”