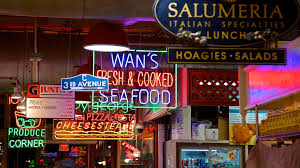 Val’s announcement that she’d scored a Groupon for lunch Sunday at The Hofbrauhaus on Pittsburgh’s South Side drew a surprising rebuke from our 10-year-old.

“Pittsburgh is too far to to go for lunch,” she bitched.

Pittsburgh is not too far to go for lunch.

Neither is New Orleans.

Paschal’s Manale is a delightful little bistro tucked away on Napolean Avenue. They’re famous for what they call a barbecue shrimp that to me should be called grilled shrimp in spicy barbecue sauce. Served with a Joel Gott Sauvignon Blanc (preferrably ’97), it’s the perfect lunch.

I was ostensibly there on a assignment to cover an entertainment industry convention. It was for Details magazine which fool-heartedly had bestowed me with a limitless expense account.

I’d been to Paschal’s before and dining there was my priority.

I eventually dined at The Court of Two Sisters, Antoine’s, Galatoire’s Brennan’s and dozens of other divier and more offbeat places like the Central Grocer, famous for its mufalleta sandwich.

This is true: My expense account for the story was $3,389.75 (I preserved the invoice) and the very day after I submitted it Details folded. I don’t know whether my days in New Orleans had anything to do with the decision but, incredibly, they made good on what they “owed” me.

Those 10 days were the inspiration for my contention that if I get to heaven and their isn’t a dapper concierge with a Cajun accent there to greet me with, “Welcome to New Orleans! Here’s your expense account!” I’m going to look around for a suggestion box.

Too far for lunch?

My Tuesday lunch was all I thought about Monday during my 5-hour drive to Philly.

I was leaning heavily toward historic Pat’s cheesesteaks at the historic culinary corner of 9th St. and Passyunk. But it was only 40 degrees out and there’s no in-door seating that I recall.

Moshulu was an option. It’s on a ship in the Delaware River. I’ve written about it. It has wonderful ambiance and was the immigrant ship seen bringing Vito Corleone to America and is briefly seen in the famous training scene in the first “Rocky.”

But, really, if you’re in Philly and you only have one lunch to enjoy, your only choice is the Reading Terminal Market.

The cavernous, but cozy old rail terminal is home to the nation’s oldest continuously operating farmer’s market and features dozens of fantastic stands for everything from gobs to oysters.

It’s one of the few places I go where I enjoy a true buzz with near-zero possibility I’ll depart with an actual buzz.

I arrived at 9 a.m. and wound up having two lunches before noon.

Purists may criticize my choice, but I couldn’t resist the, yes, bayou temptations of Beck’s Cajun Cafe. The hot plates of gumbo and jambalaya caught my eye, but decided on the mufaletta.

I chose wisely. It was the best muffaletta I’ve had outside of New Orleans. It was so good I returned for a second one to take home.

And while I was waiting for that, I read the menu and felt my taste buds rise up and demand I order a Po’ Boy Train Wreck, a messy combination of andouille sausage, steak, salami and onions on a French baguette with cheese and Creole mayo.

Not good. First it was a real mess. I’ll slob it up for something tasty, but this didn’t appeal to me. The Train Wreck was a train wreck.

Still, I ate half, which left me in an awkward position.

I hate seeing any food go to waste and remain hopeful someone, somewhere is inventing a machine that’ll allow us to one day fax leftovers to the hungry.

Taking it home on a 5-hour scoot wasn’t a good option; the smell would be riding shot gun.

Where’s a hungry person when you need one?

In fact, in downtown Philly, they’re everywhere. Philly has a sad homeless problem.

I saw a guy outside I thought would be perfect. He was sitting on the sidewalk playing little ditties on a beat-up keyboard.

Surely, he’d like half a sandwich. I bought him a Coke, too, because what’s a po’ boy with out a Coke?

He surprised me with a question.

Did the sandwich contain any pork?

I told him it did.

Beggars CAN be choosers!

So I pulled out my wallet and handed him a $10.

He thanked me and said, “Now, I can buy something I want.”

I wished him luck and tossed the remains of the Train Wreck in a trash can around the corner.

I spent a lot of the drive home pondering the unfairness of life where a man this devout lives on the streets while a man as dissolute as I is at liberty to eat multiple meals at 3-hour lunches of excessive leisure.

I’d enjoy seeing him again in heaven where we could philosophize about the crazy disparities of our earth lives.

Or maybe he’d visit me in hell where based on that one encounter alone souls like mine belong.

A $5 solution to all homelessness