Oscar flub happened to me in '06 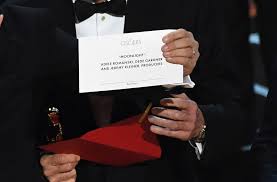 “La La Land” director Damien Chazelle must still be feeling emotional whiplash, which must be oddly familiar because his breakthrough hit was an outstanding 2014 emotional hit named “Whiplash.”

People speculate it must have been devastating to have been told you were going to win a prestigious award and have it been cruelly snatched away.

It was way back when I was still quasi-legit as a professional writer. I was doing features for a truly legit outlet, Pittsburgh Magazine, which was paying me a truly legit wage.

It was two years before I began blogging when the truly quasi began to overwhelm the legit.

I was doing the magazine’s “BackTalk” column, slice-of-life features about interesting locals. Pittsburgh is full of raucous characters and the column was well-received, enough so it was nominated for a prestigious Western Pennsylvania Press Club “Golden Quill” award.

I remember the awards ceremony being a swanky affair at what was then the Pittsburgh Hilton. I was having a pre-dinner drink with a board member who congratulated me on my win.

“You mean on my nomination,” I corrected.

I was startled. It wasn’t the way I wanted to find out. Now, instead of an authentic reaction I’d have to fake emotion in a room full of real journalists who in the not-too-distant future would be accused of promoting in fake news.

I began to game plan my acceptance speech and the degree of strut cockiness I’d use on my way across the stage.

I had it all worked out by the time my category was announced.

And the winner is …

I hadn’t begun rising from my chair, but my knees were in the process of straightening.

I glared across the room at my guy. He was looking right back at me. He was shrugging, his expression one of bewilderment.

He later swore my name was written beside “Winner …”

Well, let me tell you, I wound up getting pretty drunk that night which, by the way, is exactly what would have happened had I won so it was all a bit of a wash.

None of that, however, is what makes this story interesting.

What does is the identity of the actual winner.

It was Teresa Heinz!

If I’m “Eight Days To Amish,” Teresa Heinz is about 10 million light years from them.

The matriarch of the $1.6 billion Heinz family, she’s the Mozambique-born widow of Sen. John Heinz III and current wife of 2004 presidential nominee and recent Secretary of State Sen. John Kerry. She’s a philanthropist/environmentalist/educator/business and stateswoman whom I admired for referring to creepy Sen. Rick Santorum and perennial GOP presidential candidate as “Forest Gump with attitude.”

I could see losing a Nobel Peace Prize to her.

But a Golden Quill?

Apparently, she’d written a column for her foundation’s magazine, “H,” that moved the committee, which — and I’m not accusing — may have seen some profit in kissing her golden ass by declaring her the winner over me, a man whose ass remains pristinely free of kisses.

Of course, she wasn’t there to accept the award, probably off bottle feeding endangered baby rhinos on some central African savannah.

I wondered in which of her five palatial residences she’d be displaying her Golden Quill.

I was more baffled than bitter.

It all seemed so surreal.

I thought about graciously reaching out to congratulate her, proving I’m capable of some deft butt smooching when I see a potential payoff.

I thought maybe she’d be impressed with my manners and hire me full-time for her multi-million dollar foundation.

It was illogical thinking, sure. Pure fantasy, a frolic in cerebral la la land.

But who knows? It might have turned into some scratch.

I’d have settled for a chance to moonlight.

Roger Ebert move about life itself