The day-long swim meet from Hell 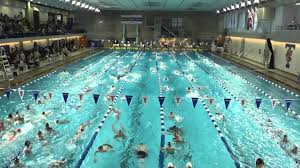 It was an indicator of either my desperation or my depravity, but after five hours of confinement I began to feel a kinship with people who become refugees because of acts of war or acts of God.

I’d equated my situation with those who’d lost their homes, their humanity and their hopes in cruel circumstances beyond their control.

But, hey, that’s what five consecutive hours of the Chestnut Ridge Winter Swim Championships will do to a rational dad.

Understand, at five hours we weren’t even half done. Oh, no.

We’d loaded up the car at 6:30 a.m. Saturday for the 40-minute drive to Penn-Trafford High School in Harrison City. I’d miss out on a day’s worth of televised college basketball, agreeable meals, reading in my recliner — all the hallmarks of refined civilization.

To top it all off, our day began with low-grade marital discord when Val accused me of being negative.

We arrived at sunrise to find every parking spot taken. I don’t know how many parents/coaches/supporters/staff were invited, but not one of them had the sense to decline.

I found a distant spot in a muddy field and said a fast prayer the Saturn wouldn’t sink up to the axles.

We were herded into one of two massive gyms and told to carve out floor space.

Kids, ages 8 to 14, were everywhere. They were blaring their popular music, throwing toys and screaming for attention.

After two hours, I tried to recall the last time I was marooned in a situation so rife with unruly tumult. I had to go clear back to 1981 in Buffalo.

I didn’t go there to see kids swim.

I went there to see the Rolling Stones!

This was the same kind of atmosphere, but with better toilets and less weed.

Really, I should have brought a keg and tried selling beers on the sly.

Had I been given to an amoral bent, it would have been a swell time to summon a local hooker for some commercial  recreation in the backseat in the ol’ high school parking lot.

But either scenario would have likely led to me being caught and exposed as a bad father.

And the pressure to appear “good” in these situations is overwhelming. Why else wasn’t there a revolt after say, Hour 7?

I was told organizers used to break this mammoth fundraiser into a morning and an afternoon session. The problem was the morning parents would leave before lunch and the afternoon parents would lunch prior to arrival.

And that’s what it’s all about.

Really, an event of this grandiosity should never be held at a local high school.

It should be held in Rio.

If you’re going to have pretensions of Olympian impact, you should hold your event at Olympian venues.

Seating was at such a premium I missed one of Lucy’s relay races because the already cramped viewing area was too packed to admit even one more parent.

If you think missing the event left me saddened, you’re mistaken. If anything, seeing the events was even worse than being incarcerated in the gyms.

I’ll never understand parents who feel the need to scream, “Go, Peyton! Go!” at a kid whose ears are underwater. Steeler playoff games are less raucous.

Oh, and the event I missed was just one of four — four — from the entire day.

All told, our daughter was in the water a grand total of 7 minutes and 43 seconds of an event that lasted 12 interminable hours.

It was utter madness.

On a day when the actual participants are barely in the water, it’s the parents who put up with this crap who are the ones who are all wet.

Swim meets and my history of hugging