December Tweets of the Month 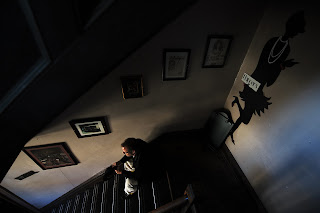 It makes little sense, but I still get a real charge out of coming up with funny tweets or ones that hint at submerged wisdom. Plenty of both in this month’s @8days2Amish, I think.

• I’m still wrestling with the idea of having to earn a living. Being born entitled me to living and, by God, I intend to truly live.

• I have to imagine a country named Togo has really great take-out food.

• I’d take high road more often but I always get hassled by cops whenever they see a car as crappy as mine in nice neighborhoods.

• If I were in charge of adding automatronic Trump at Disney Hall of Presidents, I'd have him admiring size of own hands during Lincoln speech

• I wonder if temperature in heaven is individualized or if some old ladies complain it's always too cold & bundle up in sweaters.

• I predict 2017 will be the year we all simultaneously learn if a sitting president can appoint himself to the U.S. Supreme Court.

• I remain optimistic one day my ship's going to come in. I'm just fearful when it does, it'll be a leaky one-seat row boat with just one busted oar.

• As of today, I'm resuming my practice of shouting, "Blucher!" moments before the horse whinny on "Sleigh Ride!"

• I just positively verified the conspiracy theory that the truth is nothing but a rumor.

• Told daughter, 16, moment I no longer make her laugh is moment I stop trying to be funny. Her reaction means I have about 8 mins.

• I wish I were a famous Hollywood director so one day I could shoot a scene with Robert Redford driving a red Ford.

• ”Too ugly." "Too fat." "Looks stupid." What is it about Christmas tree shopping that turns my daughters into Donald Trump at beauty pageant?

• If I were God there'd be no war, no injustice & every snowflake would be an identical smiley face. Who am I kidding? There'd be no snow!

• Note to gift-buyers: The very best stocking stuffers will always be feet.

• Understand as you go through life that the people who are often most difficult to love are the ones who need love most.

• I’m convinced the world won't be whole until everyone either has or is a doting grandparent.

• This will betray my warped priorities, but if my house is ever in bad earthquake how long will it be before I can safely open a beer?

• If I were any cooler the Weather Channel will be forced to factor my existence into all its climate change forecasts.

• What should they call those of us who prefer real, live Christmas trees to artificials? Saps!

• I like it when people do good deeds and choose to remain anonymous. Saves me the indignity of having to kiss a lot of ass.

• It no longer makes sense telling anyone to go to hell. Sooner or later, hell comes to all.

• Sometimes I envy crustaceans. They never need a petty excuse to feel crabby.

• I figured out a reason why Trump relies on his kids and not a conventional braintrust. It's because Trump doesn't trust brains.

• “Oh, there's no place like phone for the holidays!” (with picture of family staring at phones)

• I’d like to see how a Geiger counter reacts if you take one to a Geiger family reunion.

• Discussion of North Korean tyrant continues to confuse me. I thought Rudolph was the deer leader.

• I wonder if the Bethlehem bullies ever taunted Jesus with the old "So you think you're better than me?" line.

• How come the only time you hear of a damsel is when she's in distress? I hope '17 is the year I see a damsel in, say, a laundromat.

• I’ve never once seen a white supremacist who's made me, a fellow white, feel the least bit superior.

• Never in my wildest dreams thought I'd say this, but I’m starting to pray Trump calls George W. Bush for advice on how to run the country.

December Tweets of the Month, ’15

December Tweets of the Month, ’14

December Tweets of the Month, ’13