The forecast calls for beard 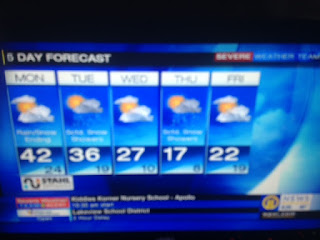 I’m reluctant to grow my seasonal beard because it always makes my face look like an armpit with a yapping mouth in the middle.

It’s scraggly. Disheveled. Patchy. My beard is destined to look like the rest of me looks when I wake up hungover.

Yet grow it I must, appearances be damned.

Monday was the beard forecast.

Regular readers know what that means. The five-day on WPXI-TV’s noon news showed there were three consecutive days with chilly highs below 30.

For about 15 years now, that’s been the signal for me to begin growing my annual chin divot.

My reasoning is primal. A beard — any beard — really takes the sting out of the winter’s bitter bite.

It serves the same purpose as a shaggy scarf with one key difference: I’ve never left my beard behind in a bar or lost it amidst all the mittens and boots in back of the hall closet.

In winter, it’s always there for me. I’ll have its back for as long as it has my front.

The beard will stay until about mid-March when — hallelujah — the WPXI five- day forecast shows three consecutive days with highs either 40-degrees or above.

So in some ways, my face becomes to my friends like Punxsutawney Phil only with marginally better grooming. They look to see when I’m clean-shaven to know when it’s time to start thinking about  hosing off the window screens.

And the minute they release a ZZ Top action movie, man, I’m there.

I envision these hipsters spending hours in front of the mirror pruning stray hairs, tweezing unruly curlers and generally shaping the bush.

And let’s drop the manure-hauling analogy right there.

I guess today the advent of the beard coming, coincidentally during the Advent season heralding the arrival of another famously bearded man, resigns me to to the fact winter’s here.

I spent about an hour shoveling snow off the driveway today.

I spent about 10 minutes of that hour checking to see if I could disprove centuries of science by finding two snowflakes that looked exactly alike. I did not.

I keep hoping one of these days God will confound us by giving His people an entire winter of snows where every single flake is an identical tiny smiley face.

That would be, well, cool.

Really, there’s so much to love about winter. There are snow angels, sled riding, skiing, hot cocoa and soups simmering while you warm up in front of the fire.

You can do all that in one afternoon.

Maybe this year I’ll change my routine and shave off my beard when I start getting sick of winter, like about January 4.

Who knows? Maybe shaving my beard will cause the temperatures to spike, instead of the reverse.

Now, that would be really cool.

How weather forecast determines winter is over

I shave my beard; Lucy lops her locks