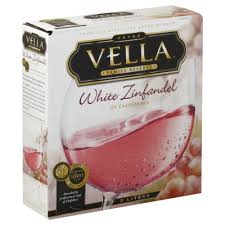 All I know about Boxing Day I learned from a 1981 episode of M*A*S*H that featured Col. Potter swapping duties with Corp. Klinger, an idea based on what was said to be a British military tradition.

I don’t know whether tradition has anything to do with boxed wines, but my Mom needed wine so I figured getting her another box of Peter Vella’s White Zinfandel on Boxing Day could be a new tradition so that’s just what I did.

In case any of you are wine snobs, I believe the vintage was, er … March!

I wouldn’t want this to degenerate into one of those mine-is-bigger-than-yours debates, but how much does your wine bladder hold?

Her doctors say Mom’s something of miracle because she’s 84, is in perfect physical health and takes no medication. Nothing.

She just drinks a lot of Peter Vella white zinfandel. She probably has four or five glasses a day.

In fact, I’m thinking of seeking some kind of endorsement deal where she did Peter Vella white zinfandel commercials, but sold them as some sort of tonic, which is I guess what the stage show quacks used to do in the Old West.

It’s odd because my family will remember what she had for lunch 25 years from now.

She is the picture of physical health on a diet that is almost all wine and chicken tenders.

Really, someone should study her while they can. She has dementia, which sounds dreadful.

But I wish I could infect about 80 percent of adult Americans with what she has.

Because she is unbelievably sweet. She makes Fred Rogers look like a sourpuss.

So her dementia can at times make me crazy.

I figure God adds 18 months to her life every time I respond to her sweetness with sarcasm.

I took her to the dentist last week — the adventure could be the plot of my next book — and asked if she wanted to stop someplace for lunch.

“Yeah! Let’s go to McDonald’s and get some chicken tenders!”

I told her I’d take her to McDonald’s, but they didn’t have tenders: “They only serve nuggets.”


She asked when they stopped serving chicken tenders.

She asked me five times in the next 10 minutes when they stopped serving chicken tenders.

I answered with patient sincerity four times in a row, but the fifth time I said they stopped serving chicken tenders when studies revealed they were causing forgetfulness in senior citizens.

Bless her heart, she laughed.

I’ve been through so many roles with this wonderful woman, now in such obvious mental decline.

I was her baby, her buddy, her little rascal. I was the father of her grandchildren, her assistant, her cheap labor and a shoulder she’d cry on. For the last eight years I’ve been her primary caretaker, an odd role responsibility for someone so irresponsible in his own life.

I think my main role now is another oddity.

If there’s anything she loves more than wine and chicken tenders it is going for long rides in the country.

Since September, she’s lived just five minutes from me. She’s living independently in Latrobe. We’ve unplugged her stove, have her over for meals near daily and are nearby when she gets confused about why the TV’s disobeying the remote.

It sometimes takes me an hour to drive those five minutes.

She loves looking at Christmas lights.

Some may criticize me for not trying to reduce her wine consumption or add nutrients to her diet.

They think her tippling is somehow sinful.

I promise I’ll take the necessary steps the instant she begins to appear either less healthy or less happy.

Until then, she’ll remain a delightful combination of silly and sweet, a confused joy to be around.