The prisons we construct around ourselves (from '12) 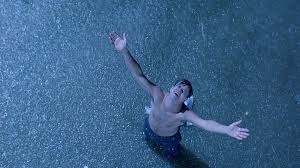 It was 24 years ago this weekend I quit my last job and began shacking up with Val. I last wrote about it in '12. Still feel the same so it's today's re-run.

I thought about commemorating the 20-year anniversary of my doing mostly nothing by doing more nothing, but that seemed too obviously redundant.

This weekend marked 20 years since I quit the last salaried job I ever had.

There’s more. It wasn’t just the last day I ever had a steady paycheck. It was also the last day I had what I guess you could call a steady girlfriend. This weekend in 1992, I took the step beyond steady.

If you judge my life on the wisdom of those two life-altering decisions undertaken within 24 hours of one another then I’m an absolute genius.

First, I left daily newspapers, an industry that in the next 20 years would shed profits, payrolls and prestige.

Second, moving in with Val was the best decision of my life. Our 3-year shack-up commenced on July 1, 1992, and led to an escalating progression of love, marriage and eventually our two darling daughters, Josie and little whatzzer name.

So in one 24-hour period I went from being a single guy with a job to being an off-the-market guy with no job. Everyone thought I was crazy, including the woman who today is, in fact, diagnosed with a form crazy herself.

My mother was flabbergasted that I would leave what seemed like a stable newspaper career to work full-time doing oddball features for America’s most notorious publication, The National Enquirer.

Why would I even consider such a thing? What will I tell my friends? Aren’t you worried about your reputation?

“Mom, you just don’t understand,” I said. “This will make me a much more interesting person.”

From 1992-1999, I wrote more than 1,000 swashbuckling features for Enquirer, many of them involving the world’s most fascinating people and places. You can check out a nearly 4-year-old recap here.

It’s impossible to calculate how much prestigious and profitable work I passed up in favor of work that would be fun and interesting.

This has been to my financial detriment, but will I in the long run be better off?

I remain surprised I’m not yet a successful novelist. I have for five years been pitching a novel that gets great reaction from top people throughout the publishing hierarchy. I reprise the premise here in case any of you are powerful literary agents or publishers who’s been reading my blog strictly for the fart jokes.

It’s about a 117-year-old man who in 2079 is identified as the last baby boomer. By then people are so sick of baby boomers they will put him in a museum suite and charge contestants $25 each to spend 15 minutes with him in the room.

If they’re in the room when he dies, they win the jackpot.

One problem: He won’t die.

Because everyone has to die, but only one of us gets to die last.

Maybe I should rewrite it and add parts where the old man has sex with zombies.

But “Use All The Crayons! The Colorful Guide to Simple Human Happiness” is showing signs it may flourish, and I’m getting interest from important people on two non-fiction proposals.

“We are born free and spend the rest of our lives constructing prisons around ourselves.”

That, I believe, is the most profound line I’ve ever written. It sounds almost Biblical, or like something that could have been written by ageless sages like Plato, Socrates or Jeff Probst.

But it’s mine and I truly believe it. In fact, I live it.

The prison I’ve constructed for myself has no security. It’s cheerful, nurturing and filled with love.

Ironically, for a place with no security, it has a lot of bars. For the last four years I’ve done most of my writing right above one of them.

As I look back on the last 20 years, I thank God for the decisions I’ve made.

My life has been interesting with interest compounded.

It takes my breath away to think the next 20 years could be even more interesting.

And it’ll be nice if it pays just a little bit better.