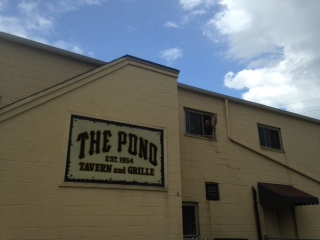 It was one-year ago I wrote what I consider one of my sunniest-in-the-face-of-adversity posts of all time.

I’d just been evicted — Evicted! Me! — from my long-time office above my favorite bar (look closely and you'll see me waving out the window above). The legal maneuver was necessitated by the sale of The Pond, the landmark Latrobe tavern that had been run by three generations of the beloved Carfang family.

A bar that had been thriving since 1954 was getting what some would call a facelift, but in fact was more like a personality transplant.

A daily routine that had brought so much joy to so many happy inebriates was ending.

How did I react to these dual hits to my exuberant lifestyle?

I prosaically turned lemons into lemonade.

I said we need to embrace change. I said the new owners would be wise and innovative, careful of the bar’s legacy while simultaneously forward thinking enough to bring needed improvements for the August re-opening.

And me and my bar regular friends would all live tipsily ever after.

How’d that work out?

Well, it all went to shit.

The new Pond didn’t re-open in August. It didn’t open in September or October, either. It finally opened in November.

Ominously, a big “FOR SALE” sign appeared on the front edifice in April. It was quickly removed when the new owners discerned it was bad for business.

I optimistically thought things were turning a corner right as the Penguins successful chase of the Stanley Cup began heating up. Me and a few of the regulars had tentatively returned because The Pond’s always been a great sports bar.

I with cheerful vision mentioned this to a local real estate agent right there at the bar one night. The place was packed. Sid had just scored. Everybody was having a great time.

“You know,” I said to my friend, “I think the place has really turned a corner.”

“You’re right,” he said. “It has turned a corner. It’s closing for good next week.”

So The Pond, a bar that had endured as if in a happy time capsule for 64 years, is for sale — again — for the second time in 12 months.

And I’m reminded of the frequent lament of former owner Dave Carfang who’d pose the riddle: How do you make a small fortune in the restaurant business?

“Start with a large fortune.”

So was my rosy optimism unwarranted?

It sure wasn’t for me.

I’m now nestled high above the historic Tin Lizzy. I have a great view, cool ambience and my daily choice of three great bars and now a fantastic new host restaurant.

I like best that convivial readers from all over have read about the Tin and made the pilgrimage to Youngstown.

We roam the whole historic building, have a bite and then usually snag a 12-pack for beers up in the shabby office adjacent to the indoor cornhole court.

So what could possibly be missing?

Our Pond regulars have scattered. Some joined a local social club, some frequent bars closer to their remote home.

One, I’ve heard, has quit drinking altogether, leading concerned friends to consider the moral ambiguity of what I guess would be a reverse intervention.

I love it here, yes, but I miss the carefree banter that comes from having seasoned friendships with nearly a dozen guys who instinctively got all the jokes.

That’s what we lost when The Pond closed.

Worse, now getting together with anyone is like a belittling daisy chain of unseemly considerations about who wants to go where with whom.

One guy doesn’t like one place because the beer’s too expensive. Another says the TVs are too small at another joint. Some scout the text message recipients to make sure they’re not feuding.

So trying to herd grown men together for an afternoon beer has logistical elements familiar to Ike and Operation Overlord.

I’m the lucky one. My desk chair swivels right above three of the best bars in Westmoreland County.

What was once so perfectly simple and simply perfect is now not.

I’d say it’d drive me to drink, but I no longer know where the hell I’m supposed to be doing that.

I’m lovin’ cornhole! Who wants to join me?

The Pond is for sale: anyone want to buy a bar?