Brace yourself: Earth running out of sand! 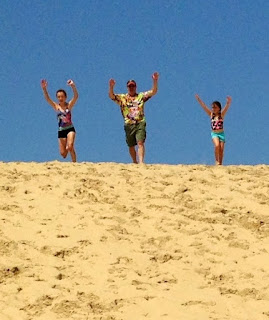 It’s not easy being a “big picture” guy with a measly 38-inch TV, but I manage. I fret over trends, long-term consequences and hidden dangers far from the front pages that report over so many daily panics.

I worry about all the elemental stuff that’s disappearing before our very eyes: the ozone layer, fresh drinking water, the rain forests and watchable Hollywood movies for discerning adults.

And a lot of it keeps me awake at night. I worry about our future.

I wish sometimes I could just run away to the beach and wiggle my toes in the sand until all my cares drift away.

At least I used to until I read a big-picture story way back in the daily newspaper — oh, and they’re going away, too — about something I thought we’d never exhaust.

Earth is running out of sand!

The NYTimes essay was by Vince Beiser. He has a lucrative book deal on what he’s calling the “most overlooked commodity on earth: sand.”

And, yeah, it kills me he’s got a book deal on, geez, sand and I can’t get squat for books on topics that have elemental value to each and every human being. I’m talking crayons!

Maybe my next book proposal should be the overlooked cultural significance of squat.

“Sand,” he writes, “is the essential ingredient that makes modern life impossible,” he writes. “And we’re about to run out of it.”

You’d think we’d be able to replenish the surplus just by shaking out all the floor mats from inside Florida rental cars. But he makes a very compelling case. Sand is the glue in asphalt, concrete and even glass.

A United Nation’s study said the world used enough concrete in 2012 to build a wall 89-feet high and 89-feet wide around the equator.

Donald Trump, eat your heart out.

And the world is on an unprecedented building boom. We have more and more people on the planet and all of them are moving to cities.

The problem is sure to exacerbate because the world’s urban population was 746 million in 1950. Today it’s 3.9 billion.

And the story doesn’t say so but it’s a safe bet fewer than 1 percent of those kids will turn out to be committed to a lifetime of celibacy.

The problem is not going to go away.

In Indonesia, some two dozen small islands have disappeared since sand mining privileges were granted in 2005.

What are two dozen mini-paradises when someone out there is too inconvenienced to drive another five miles to snag some Taco Bell?

It once again proves my adage that no matter how civilized humans pretend to be, when you get right down to it we’re all just parasites with personalities.

“It once seemed as if the planet had such boundless supplies of oil, water, trees and land that we didn’t need to worry about them. But of course, we’re learning the hard way none of those things are infinite. We’re having to conserve, reuse, find alternatives for and generally get smarter about how we use those natural resources.”

He says it’s how we’re going to have to start thinking about sand.

Of course, given our political climate, it’s likely sensible solutions will be evaded in favor more posturing and bullcrap, the only resource humans are guaranteed to  never exhaust.

I just don’t look forward to wiggling my toes in it.

How green are my Apples: my new iPhone