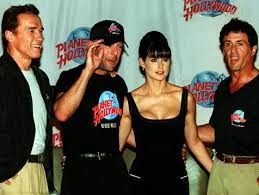 I guess the idea came to me at about the Bridgeport exit of I-79 South, about 40 miles south of the Pennsylvania/West Virginia border.

I’d been trying to think of a way to conclude my speech to 250 WVU 4-H students so the film clip would make it appear I’d just given the greatest speech ever, something I knew I was incapable of doing on merit.

This was the biggest crowd I’d ever addressed and they were college students, a very demanding demographic in terms of entertainment. And I’m not yet a great public speaker.

So how could I get them to react the way I wanted?

I asked them nicely.

I did my usual conclusion and received a warm ovation.  But in mid-applause I held up my hand to silence the crowd and said, “I now want to ask you a favor. I’m taping this for promotional purposes. I want to film the greatest ending ever. So I’m going to do the last 30 seconds all over again and this time I want you to go out of your minds. I want you to pretend that I’m Oprah and I just promised you each a brand new car. So here goes …”

Check it out. It’s pandemonium. And then I really ham it up. I bow, blow kisses to the audience and then take off to high five half the crowd. The camera loses me for about 20 seconds which will allow me to enjoy telling the lie that I went for a jiffy little crowd surf.

I swear, Oprah herself would be envious.

So would Bruce Willis.

I thought of him after I saw the clip because it was with him I’d previously felt such a surge of mass adulation.

It was June 1998, back when I was still doing lots of stuff with National Enquirer. My editor called and asked if I could scoot down to Baltimore where Planet Hollywood was opening a short-lived restaurant on the gorgeous Inner Harbor.

“We snagged an invitation to the opening party and we want you to go and just see if Bruce Willis does any misbehaving.”

I did very little celebrity reporting for them, sticking mostly to oddball features. But every once in a while they’d need me to eyeball a celebrity and I was happy to oblige.

That’s what happened in Baltimore. Hollywood insiders often play ball with the Enquirer for cash or favors.

I’m guessing what happened was some low-level staffer who had access to the guest list called the Enquirer and said I’ll sneak one of your guys in for maybe $500 or maybe $1,000. The Enquirer never flinched on lavishing bucks that might lead to story tips.

Besides Willis, whose band was playing, guests included Tara Reid, Shannon Dougherty, one or two of the godforsaken non-Alec Baldwin brothers.

The party was really a bit of a bore. What I remember most was when Willis was performing with his crappy little vanity band, he kept motioning for the girls in the audience — there were about 5,000 people there — to reveal their breasts. He did it nearly every tune from the five-song set.

I suspect most of them refused because he was married to Demi Moore at the time and we all understood how important marriage was to a couple like Bruce and Demi and none of us wanted to see this devout family man subjected to any carnal temptation.

But what I’ll never forget was it somehow became my first — and probably only — experience on the red carpet.

I took my party invitation to the make-shift HQ and was told my invite said I was to go in through the front door. That meant the red carpet.

I said, no, there’s some mistake. I’m not a celebrity. I’m not even a Baldwin cousin.

“No, this is a VIP invitation. You go down the red carpet.”

And so I did. It was such an odd sensation. I was all by myself. There were thousands of people flanking the walk, each of them wondering who the hell I was, and me walking and waving like I’d seen all the A-listers do at the Academy Awards.

I was feeling the love people bestow on celebrities. The men were admiring and the girls were all smiling and come-on friendly.

I understood I could have probably with very little effort snagged one of the more wanton young lovelies and taken her into the party with me. I’d have given her what would be one of her life’s greatest thrills — maybe two or three hours before giving her one if its most momentous disappointments.

What was odd was how comfortable I became as my 500-foot stroll continued.

As they were celebrating me, an unknown stranger, I was becoming before their eyes the celebrity they thought I must be.

Who knows what kind of egomaniac I’d have become if that Baltimore red carpet was a mile long?

As I approached the doors of the restaurant that would unceremoniously close within 39 months, I noticed a swag table loaded with special edition Planet Hollywood shirts for me and the celebrity guests. The sight led me to an impulsive act.

I ran over and grabbed an armful of shirts, raced back to the ropes, and started throwing them into the adoring crowds.

They went crazy! They were getting free shit from someone who might or might not be a celebrity!

I did it two more times before one of the handlers grabbed me by the arm and led me inside. I’d probably given away 25 shirts.

The recipients were ecstatic.

I’ll bet some of them said, “I don’t who the hell that guy is, but I’ll bet one day he’s going to be famous and then I can find out his name and always brag about the night he gave me a free t-shirt.”

I hope they still have that shirt.

Because I am famous. At least to 250 WVU students.

Oprah would be proud.

Hollywood hoo-hah, “The Butler,” and me