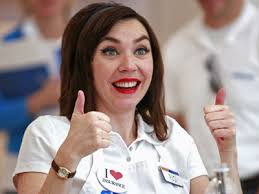 I’m still stewing over Oscar’s apparent snub over America’s greatest actress for reasons I can only surmise had to do with skin color.
Oh, she’s not black. Far from it.
She’s white. Really, really white.
Of course, I’m talking about Flo, for eight years now the least hip, least urban character on all TV.
Understand, I’m white, too. But I’m not that white. It’s like Flo’s the secret white love child of Fred Rogers and, I guess, Betty White.
Like most of you, I’m sure, she used to just annoy the hell out of me. It’s that way with most recurring commercial characters — and Flo flacks for Progressive Insurance.
Given saturation media, there are many days most of us see or hear more from Flo than we do our spouses.
But I’m starting to dig her.
Certainly not in a sexual way. I’m no Flo fetishist — and there are thousands of them out there, although actress Stephanie Courtney, 46, says the Geico gecko gives off more sexual heat.
I think it started when I heard her doing a radio spot where she simultaneously played a medieval baron and a modern architect who’d been hired to build the royal a castle.
In 30 seconds she’d vocally pivot between two characters separated by a chasm of 600 years. She enunciated every accented syllable like her life depended on it.
Sean Penn’s earned two Oscars and, guaranteed, he’s never done anything so compelling as this stupid insurance commercial.
It was dramatic. It was funny. It had nothing to do with insurance.
What’s not to like?
Then there’s the commercial that featured her entire family: mom, dad, brother, sister, grandpa and Flo. And she played all of them!
Meryl Streep’s never pulled that off.
I’m fascinated by people like her, ones whose dreams come true, but come true slightly askew.
Like Courtney. Her bio say she was a member of The Groundlings, the highly-regarded L.A. comedy improv troupe and she’s appeared in a scattering of minor TV and movie roles.
Certainly, she probably grew up dreaming of being rich and famous.
As Flo, she’s likely both.
But is it enough? Do her colleagues dismiss her as a lightweight?
I hope not. She’s really created an indelible character, and a very appealing one at that.
She seems perfectly cool being Flo. She’s said no one recognizes her on the street and she still gets to do satisfying side gigs.
A Flo costume has for each of hte past seven years been a top Halloween option for kiddies. And she’s popular enough that Courtney in ’14 became the subject of a Flo-is-dead hoax that gained enough web momentum snopes felt compelled to step in and squelch it.
It’s pop culture fame in a world where most people are dying to let the internet know they’re alive when people start spreading rumors you’re dead.
So against all odds I admit I’m a fan.
I’m interested in both the actor and the character. I wonder what will happen to both of them.
The character, in fact, is now more interesting than the network shows on which she advertises.
That’s good for Courtney, but bad for mainstream entertainment, which used to be top notch, but today is far behind original cable offerings in watchability and now even in some commercials.
No one can call that progress.
It’s Progressive!
(This post was not endorsed by any insurance conglomerate — not for any dainty reasons of journalism ethics, but just because no one offered.)

Related . . .
Jonesin’ for Xarelto: the new Arnold Palmer ad
I cry over commercials; farewell Cap’n Jeter
Faking your death to get Christmas guests: a commercial
Everyone hates Patrice King Brown