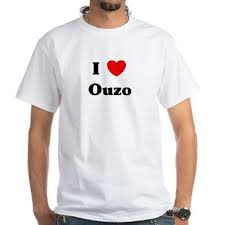 I experienced a momentary bewilderment when I read Poros, a fancy new Pittsburgh seafood restaurant, was featuring a dish described as “Salmon Cured with Ouzo.”
I used to drink an awful lot of ouzo, the powerful Greek liquor, back when I lived in Athens and the only thing I remember it curing me of was the need to wear pants.
Understand, this wasn’t Athens, Greece; it was Athens, Ohio, where I spent four years in a work/study program.
I did all my work and all my study in a bar.
I don’t recall what drew us to try ouzo, but we were probably trying to get as unstable as efficiently possible.
Ouzo allowed us to do this without repeatedly slamming bar stools on one another’s heads.
And as we young scholars noted, “You can’t spell ouzo without O.U.!” (Note: OU comes in handy if you’re trying to spell bourbon, too!)
A couple of us even looked into transferring to the university’s Zanesville, Ohio, branch so we could cheer for the football team by chanting “O.U.Z.O! O.U.Z.O!”
Binge drinking is a serious problem for many people. I can’t say it ever was for me. We all had a lot of fun.
Many people drink liquor to make their inhibitions disappear.
I don’t know how one always seemed to lead to the other, but whenever I drank ouzo the only thing that disappeared were my pants.
I was back then a notorious streaker, an admission which proves my aversion to logical thinking predates by 30 years my idea of blogging to make money.
Streaking never helped me meet girls, which was the whole point of attending Ohio University. Its magic wasn't confined to my wardrobe. I remember offering ouzo to grown women and watching them disappear!

And it certainly didn’t lead to a groundswell of campus admiration.
But ouzo was to me like stressful situations were to David Banner, only with him it caused him to lose his temper and transform into The Incredible Hulk.
I’d never lose my temper; I'd just lose my pants.
And, boy, I was fast back then, at least when I was buck naked and had campus security on my ass ... literally.

I’m sure I could have set enduring track records, but the coach told me I had to wear a uniform to compete and, no, just socks didn’t count.
Some people hate the black-licorice taste of ouzo. Even some of my friends dry heave at the recollection.
Not me. I always liked it.
So revulsion to taste wasn’t the reason I ignored it for 30 years. Like my pants once did, ouzo just seemed to disappear.
Now it’s coming back. I’m starting to see ouzo references all over.
About a month ago I read a passage in a Churchill history about a ’44 visit to Greece where his private secretary, John Colville, mistook a bottle of ouzo for gulping water. In his diary he later noted, “I have never felt closer to death.”
And he’d fought in the WWI trenches!
Then last week I overheard Buck, the Tin Lizzy owner, tell a bartender a bottle she couldn’t find was “up on the top shelf right by the ouzo.”
So I told Buck my story. I told about the intoxication, the punishing hangovers and all those nekkid sprints across the college green.
I don’t know what part of the story intrigued him most, but he said something to the bartender and — oompa! — there before me was the first shot of ouzo I’d seen since 1986.
Dare I?
I wondered about the possible consequences to my reputation. What if my pants vanished? Would I become the town laughingstock?
Then it dawned on me how town laughingstock is such a gentle drop from town blogger so . . .
Down the hatch!
I felt the once-familiar burn in my belly. My head began to feel like it was filled with Greek helium.
But I remained fully clothed!
I felt like I’d vanquished a dragon.
I didn’t go streaking. I didn’t feel like binge drinking the week away.
I was at peace with one of the world’s most volatile spirits.
Funny, isn’t it?
A weekend where so many others will be celebrating the wearin’ o’ the green and I’m giddy over a mere wearin’ o’ the pants.

Related …
Ohio U. No. 1 party school … again!
My career advice: Don’t be like me!
My history of drinking at/near work
Matt Lauer’s got the blues
My wild & wussy weekend in Athens