The deflating results of my ballyhooed Virginia talk 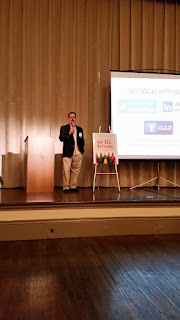 One week after QB Tom Brady won a court battle to earn the right to defeat the Pittsburgh Steelers, I’m the one who’s feeling deflated.
The confession chagrins.
Yes, I’d hoped my talk before prominent Virginia meeting planners would be a smashing success. I’d hoped they’d shower me with proposals about speaking to their clients.
Those hopes, I believe, have been dashed.
I didn’t hit a Clemente. It was more like I hit a weak single that stranded the winning run on third.
It’s incredible.
I was so confident. I was positive nothing could go wrong.
Of course, I’ve felt that way before each and every time I’ve swung a golf club for the last 20 years and take a wild guess how that’s gone.
What went wrong?
First, I was rusty. I hadn’t spoken before a group since May (which had gone so well it inflated my ego to the point where I’d thought I had it down).
Second — and this was key — I wound up having to wing it. I was forced to go without my notes.
The picture shows why.
See, that’s me holding the cordless mic several feet away from the psychological security of the sturdy podium.
I never do that. I do not yet have the confidence to speak extemporaneously for an hour.
I still prepare by scripting out what I’m going to say and then boiling that down into a key-word “set list” of the points I want to make. It’s only two reporter notebook pages taped together — very sketchy — but it’s an essential outline of the highlights.
It’s a crutch I’m not yet prepared to ditch.
I wasn’t at all nervous.
I believe in my message and am confident of the reaction I get.
Before lunch, the chapter president made some introductory remarks. I noticed the podium had no mic stand.
I asked if he could please find me one.
“I think I can go without it,” I said, “but I’m more comfortable staying behind the podium.”
He’d take care of it, he said (he later apologized and said the facility’s mic stand had vanished).
I had a wonderful lunch and when the time came for me to be introduced, I strode to the stage ready to knock one out of the park.
I put my notes on the podium, seized the mic and began to walk around the stage. That’s just what you do when you’re holding a cordless mic.
Mick Jagger would look foolish singing “Brown Sugar” from behind a podium.
And I began to talk.
Or a better word is recite.
I tried to hew to the outline that was so tantilizingly close on the nearby podium.
See, I have talking points, but I don’t rehearse. It’s not a play. It’s more freeform than that.
So when I found myself drifting, I’d go back to the podium, pick up the notes and try and discern where I’d gone off track.
And as I’m doing this, I’m realizing I’m losing the audience.
Now, of course, there’s a chance I’m being my own worst critic.
I say that with the understanding that any man who thinks he’s his own worst critic is either delusional or unmarried.
I have a lot of great laugh lines and they worked as usual.
But I began to sense it was less like a presentation and more like me talking in a bar, which I’m told is very entertaining.
To inebriates.
My talk lacked compelling discipline. The guy whose e-mail address says “storyteller” was failing to tell a story.
It’s going to take guts but one of these days I’m going to just trust myself and jump straight out of the goddamned plane.
I remain confident in my content and delivery. I just need to have the faith to take the next step.
Even if it’s a spectacular failure, I’ll at least have a funnier blog to post.
Happily, I have six speaking gigs lined up the next two months, some of them high profile.
I relish the opportunities.
At this stage, I just need more confidence, more swagger, more ego.
In short, I just need bigger balls.
And in a post that began with a Deflate-gate reference that’s as good a place to stop as any.

Related . . .
My book signing, a pit bull, Mom & a big bag of cash
My Saturday speech a surprising sell-out
I speak, some laugh, some cry, some snooze
I’m getting paid to talk to 8th graders!
Saturday, my most humiliating book signing ever
Fame and the night Bruce Willis and I owned the red carpet