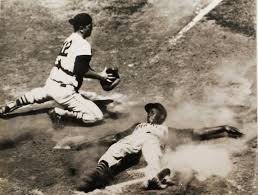 Today I will attempt to duplicate the most rare play in baseball history. Many astute fans may mistakenly think by that I’m referring to the unassisted triple play.
The unassisted triple play — one defensive player records all three outs on one swing of the bat — is, indeed, rare. It’s happened only 15 times since 1909.
In fact, I witnessed one. I was there at Three Rivers Stadium on Sept. 20, 1992, when Mickey Morandini of the otherwise feckless Philadelphia Phillies achieved the feat against the Pittsburgh Pirates.
With Curt Schilling pitching and Pirates Barry Bonds on first and Andy Van Slyke on second, Jeff King hit a liner right at Morandini, a native of nearby Kittanning, Pa.
He snagged the ball (King out), stepped on second (Van Slyke out) and tagged Bonds who with the hit and run on arrived from first simultaneously with Morandini.
To me, the most stunning aspect of the remarkable play was that it didn’t happen while I was in the men’s room taking a leak.
Cooperstown ought to have a wing dedicated to all historic plays that happened while I was in the men’s room.
Beer was a lot cheaper then and me and the boys used to drink lots of it. And if the situation on the field became too intense, I’d feel an inner tingling I sometimes confused with the need to pee.
Baseball excites me.
Beer, too.
I didn’t miss what today I’m trying to duplicate because I wasn’t in the men’s room then, either.
I missed it because I wasn’t on the planet.
It was July 25, 1956. That’s the day the sainted Roberto Clemente hit baseball history’s one and only inside-the-park, walk-off, grand slam home run.
He did it in Pittsburgh’s old Forbes Field.
The Pirates were losing to the Chicago Cubs 8-5 in the bottom of the ninth. The bases were loaded when Clemente scorched a first pitch fastball to the distant left field fence and turned on the jets.
One run scored. Two. Then three. Just like that, the game was tied.
Clemente blew through the third base coach’s urgent stop sign as Cub legend Ernie Banks took the relay.
It was going to be close.
News reports said Clemente initially missed the plate, but reached back and slapped it with his hand for baseball’s only before or since inside-the-park, walk-off, grand slam home run.
In the stands, pandemonium ensued.
If I achieve the feat, mine will be even more remarkable because today I won’t be anywhere near a baseball diamond.
In three hours I’ll be at the podium in the stately John Marshall Ballrooms here in downtown Richmond, Virginia, speaking to nearly 100 members of the Virginia Meeting Professionals International.
I use the Clemente analogy because to me the stakes are high.
If I can hit what we’ll today call a Clemente, my speaker dance card ought to fill up. In the audience will be dozens of top meeting planners, all of whom are looking for entertaining and soulful speakers.
If I can impress them I foresee “Use All The Crayons!” speaking engagements through the next year.
Baseball metaphors are often employed to gauge a performance.
Sure, I could strike out today. But that’s doubtful. I’m confident of my presentation.
I could hit a solid double. Fans don’t boo doubles.
It’d be great if I hit a home run, too.
Just not great enough.
I want to hit an inside-the-part, walk-off, grand slam home run.
I want pandemonium.
Am I nervous?
A bit.
That’s fine. The great Clemente said powerful at-bat butterflies drove his engine.
But today I feel something more positively agitating than nerves.
Today I feel confident, impatient to succeed.
I’m feeling a growing swagger.
I believe by the end of today I will have taken a crucial step that will make all that’s come before — all the struggles, all the disappointments — seem irrelevant.
I tell you, my friends, today I’m feeling a strange sensation deep inside.
I just hope when it’s my time to talk I’m not rushing to the men’s room.
It wouldn’t be the first time I’ve confused my inner tinglings.

Related . . .
Roberto Clemente: Mr. 3,000
The true tale of how I became an iron-bladdered superhero
How real men like me (and Michael Keaton) shake hands
A great day for baseball; let’s play 2! Or 3! . . .
I play centerfield
Taking pregnant women out to the old ballgame