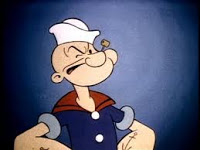 I'm looking forward to the new Steve Jobs movie and eager to see confirmed he was as big a jerk as I’ve always suspected. But today let’s talk about all the i’s in our Apples. What does the i in iPad mean? Or iPhone? I liked this one from April ’12. I hope you enjoy it today.
Tomorrow I’ll be writing about what a tour de force the Pope’s visit was and wondering why America can’t have a pope of our very own.

Email ThisBlogThis!Share to TwitterShare to FacebookShare to Pinterest
Labels: Apple products, humor blog, Popeye, Steve Jobs, what does i in iPad mean