Time for Jay Leno to guest on David Letterman 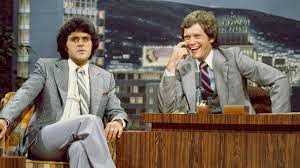 It’s time two contentious factions for the good of the civilized world put aside their differences and embrace.

Obama and the GOP?

Wouldn’t you love to see these two old friends and rivals hash it all out? The dialogue would crackle with a wit so incendiary it’d sizzle.

I’d rather watch that than the Super Bowl.

I think it’s because I know deep down Dave and Jay are really in love.

“They’re intertwined as people,” Seinfeld says, who in February made a webcast that detailed the fascinating roots of their enduring kinship. “This is my tribute to everything that’s good about their relationship. You see it clearly . . . how much they still think of each other, in a nice way. You see behind all the years of petty resentments and into this core relationship.”

Remember the buzz from the 2010 Super Bowl commercial with Dave, Jay and Oprah?

It was such a surprise delight.

The 30-second spot was a subtle, barely-noticed promotion for Dave’s show, one which Oprah and Jay both agreed to secretly do in New York. The stars both wore disguises to enter and depart the Ed Sullivan Theater so no one would know.

The three were together just 20 minutes it took to film the promo. Letterman producer Rob Burnett said, “It was very friendly, very professional, totally cordial. You could tell these were two guys who’d known each other a long time.”

I swear, Jay guesting on “Late Show” would give the whole divided country a happy lift.

If these guys can do it, why can’t the rest of us?

And, of course, it would be an obvious launching pad for future commercial endeavors.

Wouldn’t you love to see them do a weekly SNL point-counterpoint like they used to do with Dan Ackroyd and Jane Curtin?

I guess I’m thinking about getting those two together because the world is full to busting with bitter conflicts that seem beyond repair. It’s happening in the Middle East, the Ukraine and beneath the Capitol dome.

So one between two beloved multi-million dollar comics seems as good a place to start as any.

I’m the father of daughters, ages 13 and 8, who last night behaved over dinner like one was Israel, the other Gaza.

We were having dinner at Michael’s, the new wood-fired pizza joint on Route 30 at Beatty Crossroads (very good, by they way). The atmosphere at our table was so poisonous the waitress noticed and chimed in.

“You know, when my sister and I used to fight our mother made us hold hands until we got over it.”

The suggestion accomplished one thing: they’d momentarily stopped hating each other — but only long enough to focus their hatred to me.

It bolsters my contention that the world is given a finite amount of human hatred that never diminishes, but just arbitrarily shifts around. Count yourself lucky when it’s hammering someone who isn’t you.

The hand-holding tactic reminded me that I’d included some conflict resolution in my book.

I stole it from a friend who’d written it on the wedding card he gave to Val and I back in ’96. I liked it so much I felt obliged to include it in my book.

It’s No. 275: “Never fail to include in your cards to newlyweds heartfelt congratulations and this sage advice for a long and happy marriage: ‘Always argue naked!’”

I wonder how it’d work for Dave and Jay.

Let’s just hope it never comes to that.

Leno again-o: Why critics are wrong

Brace yourself: Jay’s better than Dave