The Pittsburgh Pirates & the KKK (not those ones) 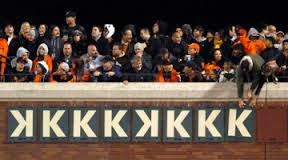 Yesterday’s big Pirate victory over the hated Milwaukee Brewers differed from many past season finales in that I wasn’t there and neither was the KKK.

Instead, it was the KKKKK.

K is the baseball scoresheet designation for a strike out.

It’s been that way for about 165 years since pioneering scorekeeper Henry Chadwick developed the iconic box score, a minute marvel of a concise yet thorough way to impart information no 1,000 word story could equal.

It is said he used K because it is the most prominent sound of the word “strike” and “S” was already useful for denoting sacrifice, stolen base or single. And this I just learned: a backwards K on the scoresheet means the batter struck out looking.

I used to be one of those baseball nerds who on occasion kept score in the stands, just like the broadcasters.

I did it for a number of years until I found many of my scoresheets dominated by the enigmatic WWs, a designation conceived by New York Yankee broadcaster Phil Rizzuto, who when asked what WW meant said, “Wasn’t Watching.”

The teams stunk. Three Rivers Stadium was empty. Nobody went.

Nobody, but me and my three buddies. And we went all the time, about 30 games a year.

You had to really love baseball to be a Pirate fan during what turned out to be a 20-year losing streak.

And I truly did. It was my golden age of fandom. I snagged three foul balls, saw an unassisted triple play — one of the most rare plays in all sports — and witnessed many superhuman feats by Mark McGuire, Barry Bonds and other men we later learned were superhuman only in the pharmacological sense.

I remember the days when it was just me, my buddies and the KKK.

See, most every team has a section where a ballpark employee keeps track of the number of strikeouts the home pitcher registers. In old Three Rivers, it was on the upper deck facade above right field.

A Pirate pitcher might get his first strike-out in the 2nd inning and a kid would get out of his seat and put up a big K. He’d get another an inning or two later and a second K would be slid right next to the first one.

This was the moment for which we’d been waiting. We knew the next strike out would be what we called “The Special K.”

Because someone in Pirate management had made a decision that The Special K — the third strikeout — should never be allowed near to the other two. A space would be left between the 2nd and 3rd Ks so it looked like this:   KK  K.

The only thing we could figure is management feared seeing three in a row — KKK — might confuse fans into thinking ownership was so desperate to sell tickets they’d offered group discounts to notorious hate mongers.

It was riveting whenever the kid mistakenly put KKK up. We’d wager among ourselves how long it would take for a paunchy team official to hike all the way to the upper deck to move The Special K.

I always thought it would have been funny to see what would happen if the four of us would have sat up there dressed in hooded white sheets whenever it went to KKK.

No one cares about the number of consecutive Ks they see, and the Pirates for the second year in a row are playing feisty ball and look playoff bound.

Me, I only attended four games and planned on watching yesterday’s home finale on the big TV, but my oldest daughter requested it for a movie. Our youngest reserved the basement for a playdate, and Val was sorting fall clothes for the kids in the bedroom so that was out.

That’s one, two, three strikes, I was out. I wound up in my office all alone listening to the game on the radio, a far cry from my baseball glory days.

For me, there was no joy in Mudville.

Didn’t bother me a bit.

The Bucs, the duck and playoff baseball in Pittsburgh