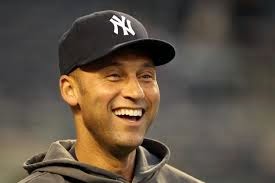 Twice this week purported loved ones asked me word-for-word the exact same question.

Read like that without any inflection, it’s a beautiful question. It’s what caring souls say to one another anytime someone’s in need of human understanding.

But my wife and daughter, 14, didn’t have compassion on their agendas.

Their intent was to mock.

My instinct was to sleeve away the tears, issue a strong denial — “Why, no, I’m not crying.” — then dash into the nearest bathroom, slam the door behind me and settle in for a good long sob.

Through teary hindsight, however, I realize I should have responded the way Col. Nathan Jessup did in “A Few Good Men” when that sniveling Tom Cruise character kept badgering him if he’d ordered the Gitmo Code Red.

“Your goddamned right I’m crying! Now put your arms around me and repeatedly say, ‘There, there,’ until I’m all done blubbering!”

I had nothing to be ashamed of.

I mean, what grown man doesn’t cry at Gatorade commercials?

The new Derek Jeter ad starts out with iconic shots of Manhattan. The great Jeter is on his way to one of his final ball games. He appears composed, reflective, magnificent.

He is the great Derek Jeter. How could he appear anything but?

He says to the driver, “You know what, I’ll walk from here,” and he exits the vehicle.

I’d say it’s like Jesus strolling through Jerusalem, but the analogy would be flawed.

He greets children, sanitation workers, bars full of delirious Yankee fans. In the background Frank Sinatra is singing “My Way.” I guess that’s what really gets me. We honored my late father’s request we play “My Way” at his ‘04 funeral.

So a song sung by a performer who enjoyed international acclaim and fabulous wealth throughout his life was played at the pauper funeral of an unknown optician who died so broke even the red pin on his leased Dodge Neon was pegged hard on “E.”

It was poignant irony, especially for me because it’s increasingly looking like Dad’s way will be my way.

I’ve loved Jeter six years longer than I’ve loved the sassy little rascal who was ridiculing me for my sentiments.

He played baseball, my very favorite sport, with exuberance and skill. That right there is enough. People loved Ty Cobb for that and Ty Cobb was at the very least a racist and malicious prick.

Cobb was everything the great Jeter is not.

Understand, Jeter’s played 20 years as the most visible athlete in what was called the media capital of the world — and that was before everyone with a smart phone became media conscripts.

Yet, Jeter has never once been involved in even a minor scandal. There is zero evidence he’s even once been a drunken lout, rude to a doorman, or left anything less than a huge tip for even the surly waiters.

I have far less visibility and am renown for committing at least one of those scandalous infractions every day before lunch.

Then there are the women. I remember one year reading he’d dated 30 of the Maxim magazine hottest women list. The list includes Scarlett Johansson, Minka Kelly, both Jessicas Biel and Alba, and most of your SI swimsuit lovelies.

Good for him, sure, but that’s not really an achievement. Beautiful women will understandably throw themselves at any rich and famous athlete.

What is exceptional is that none of the women he’s dumped has ever come out and badmouthed him like, say, all those tramps did with Tiger Woods.

In this transparent age of kiss-and-tell, no one’s ever said he’s cheap, rude, kinky or  has a snicker-worthy penis.

So what we’ve seen for the past 20 years is something remarkable.

I do cry whenever I see a human do something to exalt humanity. I cry over great art, the triumph of justice, random acts of kindness, and the site of an old man teaching a child how to catch a fish.

I cried a little more last night when Jeter hit the game-winner on his last home at-bat.

I guess sometimes I cry when I know something great I was once privileged to cheer is going away for good.