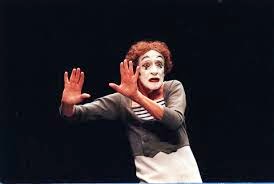 A bunch of people from France were checking out this one from '12 and it reminded me of its charming nonsense, as good a reason as any to run again. These are often my favorite kinds of posts. Just silly little diversions that never really go away. Makes me glad I'm not a political pundit.

I told a friend that careful mimes can be safe, but never sound, and he accused me of thinking inside the box.

So now I’m probably doomed to spend the rest of the day thinking about mimes.

I sense it won’t be beneficial to the bottom line.

Back when I was teaching creative non-fiction, it was a dream of mine to test my students by having them spend an hour interviewing a mime. The really inventive students, I’m sure, would have come up with some very moving profiles.

I’ve never understood mimes nor the reflexive hatreds they inspire.

First of all, who aspires to a craft that offers virtually no pay and leads to widespread public derision?

How come so many people love playing things like Charades, but hate mimes?

Our 11-year-old is going through a mime phase. She does the box thing and it’s hilarious. But I try not to laugh too hard because I don’t want to encourage any ambitions that she aspire to become a professional mime.

Of course, if she ever does express such a sentiment, I know exactly what I’ll do: I’ll convey the difficulty of the endeavor by pretending I’m walking against a really strong wind. If that fails, I’ll dramatically fold my hands together and place them pillow-like beside my temple and feign uncontrollable weeping.

We can all name thousands of rock bands, but there’s only one name when it comes to miming and that’s Marcel Marceau (1923-2007).

I never knew this before but March 18 is Marcel Marceau Day in New York City, declared thus in 1999. I will as soon as this is complete pitch that as a story idea, one I’m sure is doomed for rejection.

Yet it’s so offbeat it must be pursued. Maybe they’ll encourage all the traffic cops wear white face.

Marceau was apparently a great man. In April 2001, the University of Michigan awarded the Frenchman its Wallenberg Medal in recognition of his World War II heroics aiding Jews and other refugees fighting the Nazis.

The visual of the world’s most famous mime saving refugees and fighting Nazis sounds like a plot straight out of “Hogan’s Heroes.”

I was also surprised to learn he’s an author. He contributed several well-received forewords to respected art books. Knowing what I know about the publishing industry I can only bet compensation was offered on the stipulation the world’s most famous silent performer agreed to provide the audio versions.

Many of you may remember him for his most speaking famous role, playing himself in the hilarious 1976 Mel Brooks flick, “Silent Movie.”

Marceau utters the only word in the entire film so I guess it could be considered a French film. In it Brooks through sub-titles asks, please, Marcel, would you be in our silent movie?

Marceau, in the only spoken word in the otherwise silent movie, says, “No!”

In terms of ironic brilliance, it nearly equals the idea of a coyote eating a vegetarian.

I’ve exhausted all I know about the subject of mimes. I now have nothing left to say.

And that’s as good a way as any to end a blog on mimes.