Teaching my 13-year-old how to drive my car 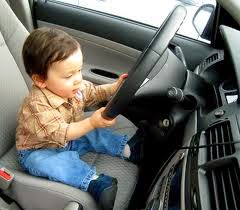 (745 words)
Our oldest daughter turns 14 in two weeks. It’s an age of looming adolescence that makes some fathers quake.

I understand now that every day she gets a day older she’s making some of my questionable parenting less and less newsworthy.

My interest in her learning to drive dates back to ’11 when I read a spate of stories about a Detroit father who let his daughter drive him home from the bar because he was too drunk to do it himself. I invite you to read the top first link below. I thought it was a goodie.

I’m not saying I’d ever do that, but if extraordinary circumstances ever called for it, I think she should know to place her hands on the wheel at 10 and 2 without having to nudge me awake.

So that’s what we did Sunday morning out back behind Westmoreland Mall in the acres of empty parking lots. Not another vehicle in sight.

That’s why it’s surprising she almost killed me.

She was coasting along — I’d wisely instructed her to not press the accelerator — when I calmly said, “Okay, now hit the brake.”

I only wish she’d react so affirmatively when I tell her to empty the dish washer. It was like a 10-point buck had jumped in front of the old Saturn.

My head banged off the windshield.

Because I was uncertain whether I’d need to once again help her adjust the driver’s seat, I’d failed to put my seat belt on.

So she learned a lesson about how instantly responsive GM’s ABS braking system can be and I learned a lesson that you should always apply proper seat restraints when a 13 year old is behind the wheel.

I want her to become familiar with what it feels like to drive a car so in two years she’ll be comfortable. And other than nearly sending her instructor head first through the windshield she did fine.

For me, the best part was the verbal instructions about driver etiquette.

“Remember, there is no such thing as a left lane. There’s only a right lane and a passing lane. Pass slower vehicles and then get the hell out of the way for guys like your old man.”

And I told her about the importance of waiting until someone who’s driving a bigger car than yours is heading down an exit ramp before you have someone in the passenger seat moon them, which is a much more satisfying expression than giving them the finger.

The neat thing about the dynamic is I know she was actually listening to me. She’s eager to learn to drive and has seen me drive competently so she knows I have information she wants.

I only wish every motorist felt that way.

I think every motorist should have to take a refresher driver’s test every five years and I ought to be the teacher.

You probably think you are, too, but you’re probably wrong.

You probably don’t use your turn signals, slow down too much when you come to a tunnel, and hog the passing lane when I’m trying to bury your ass in my rear view mirrors.

Of course, it might all become moot. I’ve been reading a lot about self-driving cars these days. Not having to drive a car will be a godsend to lots of people who find driving tedious.

Not me. I hate sitting in traffic, but I love operating a motor vehicle. I’m not a distracted driver. I’m fully engaged.

Once we get self-driving cars, the thrill of passing a slow truck on a two-lane mountain road with another on-coming driver playing chicken will be no more.

I wonder, too, if the cars will learn how to be truly self-driven and will go where they like whether we’re in them or not.

Like what if my car gets tired of spending so many hours in The Pond parking lot waiting for me to get tanked and heads off on a jaunt to lot with a more scenic view.

So I’ll likely resist the advent of self-driving cars for as long as I can.

I want to drive the car. I don’t want the car driving me.

On the upside, I won’t need an accomplice if I feel like mooning some asshole in a bigger car.

Results of my weekend crashes, the computer & the car