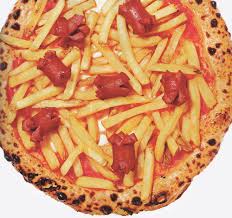 I’m not a fan of square pizzas. I think every slice ought to have at least a little crust so the consumer can know where to take that first bite.

Shapes aside, pizza is our most flexible meal. You can eat it hot for dinner or cold for breakfast. You can get it plain or with pepperoni -- the vanilla ice cream of pies -- or with exotic toppings.

Me and my buddies eat so much delicious pizza here at The Pond that we’re always thinking of ways to enliven our orders. Just the other night, me and one of the eight Regular Joes had a toppings draft.

It was like we were playground captains each picking sides for a game of pick-up basketball only in our game all the players would be on the same team, or crust as it were. He went first and chose anchovies.

Then he took black olives.

It was fun watching the anticipation in bartender Keith’s eyes grow as we’d each up the ante.

I again went with the meat option and chose sausage. He took pepperoni.

I said mushrooms and Joe said uncle. That was enough. More toppings might risk driving our taste buds insane. And together we enjoyed a pepperoni, bacon, sausage, anchovy, black olive and mushroom pizza.

I’ll be ready with the knock-out selection next time. My topping?

Hot dog. With a side of fries.

Yes, now hot dog and fries is a trendy pizza topping, at least it is at Ribalta’s Pizza in Greenwich Village in Manhattan.

The Neopolitan pizza joint is offering the “Americana” pie with decoratively cut Hebrew National franks and a sprinkling of French fries -- and what says America more than something that begins with French!

To be truly authentic, it ought to have ketchup instead of traditional sauce.

I know these things because I’m one of those guys with pizza sauce in his veins. Mostly because I had it staining all my clothes for about five years back in the early 1980s when I was western Pennsylvania’s greatest pizza cook.

I make the declaration because there’s no one else claiming the title and there’s no governing body to dispute the boast.

At 16, I was working the kitchen at the old Pub & Pizza on Castle Shannon Blvd. That’s where I learned to throw pizza dough the way the old Sicilians do.

It’s still maybe my greatest bar trick. I take the damp bar rag and expertly toss it above my head like I’m stretching the dough.

I was so good at this great little neighborhood joint, I was soon summoned to the big leagues.

I worked through high school and then summers at the Pizza Hut on Banksville Road. But that wasn’t it. Whenever a store was in trouble, the district manager called on The Kid to go straighten out the kitchen.

So if in the early ‘80s you were eating Pizza Hut pan pie in Carnegie, Bethel Park, Dormont or any other numerous South Hills locations, I’ve probably put food in your belly.

What do I remember most about those days?

I used to make out with a lot of Pizza Hut waitresses.

Many times these pretty young girls would storm into the kitchen on the verge of tears: “Table 4 is awful! They’re getting ready to walk. What are we gonna do!”

I’d slowly turn from the prep table and, me the picture of cool, say, “Calm down. I’m going to take care of you.”

Then I’d turn and in a controlled frenzy of activity I’d slice six pizzas like I was a samurai warrior, switch this one with that one and -- voila! -- problem solved.

She’d get her pizza, she’d get her tip and three hours later she and I would be making out right back there inside the walk-in cooler.

Looking back on it, I can’t believe I ever quit a job like that.

Heck, there are many days I’ll bet my wife still wishes I had that job, waitresses and all.

Sure, nobody comes to kiss me after I write a really good blog, but no one’s giving me a minimum wage paycheck every two weeks either.

I thought of this Saturday as we went to a local Pizza Hut as part of darling Lucy’s 7th birthday shindig. There was about 11 of us there, eight of them screaming 7 year olds.

The manager, a pleasant woman of about 60, handled the whole thing with ample cheer and charm. She had a great attitude and was the kind of twinkly-eyed woman men from my Dad’s generation used to approvingly describe as “a broad.”

I told her I used to work for Pizza Hut about 30 years ago.

“Were you management?” she asked.

She gave the boy a good long look.

“You know,” she said, “they don’t make cooks like they used to.”

The party was wonderful. The pizza was delicious and all the kids had a great time. We were there about an hour and then it was time to head off  to the next folic.

I’m glad we left when we did.

I could see where things were headed and I know I’d have had trouble explaining to my wife just what the Pizza Hut manager wanted to show me back there in the walk-in cooler.