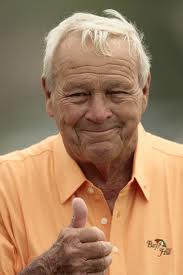 The most frequently asked question of myself isn’t “How do you get by without a job?” or “Are you ever going to pay me back that twenty bucks you owe me?”

And if you’re playing at home, the answer  to the second question is directly related to the answer to the first.

It’s a question everyone who lives in Latrobe, as I do, gets from people around the world.

I get it more than most because many people are aware I’ve conducted more than 50 interviews with him for various golf publications, the majority of them hour-long Q & As for his ultra-posh lifestyle magazine, “Kingdom.”

And Palmer agreed to provide the gushy cover endorsement for “Use All The Crayons!” so people have a right to expect me to have some expertise on the subject.

It doesn’t begin to do justice to the momentous legacy.

The illustrious resume often leads to a secondary FAQ: People want to know how much Palmer’s worth.

One internet website that tracks celebrity wealth pegs the number at $675 million.

I spend a lot of time trying to brainstorm ways to narrow the gap.

And this week I think I’ve seized on one.

I’m going to look into auctioning off a chance to accompany me the next time I interview Palmer.

I figure the bidding should start at about $5,000.

I believe many well-heeled members of Arnie’s Army would shell out big bucks to meet Palmer and observe our banter.

I’m often given a series of questions geared to topics destined to be featured in the upcoming issue of “Kingdom.” So there are questions about golf history, dinners with The Queen, planes he’s flown around the globe, and his recollections about some of the world’s most lavish resorts

But the conversation is freewheeling enough I always slip in questions about things that have nothing to do with what’s scripted. Things like if he believes there will be golf in heaven (he does), if he owns blue jeans (yes, for days when he feels like riding a horse), and if he’ll ever appear on “Dancing With The Stars” (“No, as a dancer, I’m a pretty good golfer”).

We talk about Pirate baseball, the hazards of playing golf with your dog, and how things are at The Pond (he’s told me his daughters were raised on Pond pizza).

At some point in each and every interview, something in my mind clicks and I think, “Wow, I’m sitting here just shooting the breeze with one of the world’s most beloved men.”

Kirk Douglas said about him in 1970 that no one he’d ever met -- not Sinatra, John Wayne or Ronald Reagan -- has more charisma than Palmer.

At the end of every interview, he stands up, shakes my hand and says something so warm it blows me away.

I’ve learned to leave my recorder running clear until I get into the car. One of these days I’m going to compile all the compliments in a tape loop. The intro will say, “This is Arnold Palmer talking about me,” followed by two minutes of Palmer saying things like, “Chris, you’re the best;” “Always great seeing you, Chris,” etc.

Yes, one of these days that will be my phone greeting.

On second thought, maybe auctioning off the Palmer interview isn’t that great of an idea.

Seeking further enrichment from such a privileged situation would be greedy.