Philipsburg, Montana, wants me (and you)! 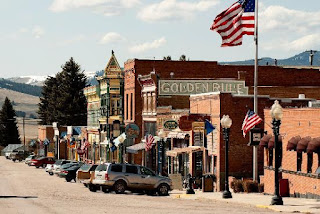 (726 words)
The note betrayed courtesy that seemed to me uncommon among most Montana sportsmen. It informed me I was in the crosshairs.

Headhunters are after me and my family. Yours, too.

I doubt any of the area big game elk or deer receive similar e-mailed warnings.

Of course, those who are after me aren’t planning on mounting my trophy head up above the fireplace mantle in some den or tavern. I think.

Check this out from www.MoveToPburg.com:

“Philipsburg is looking for a few good families.  In an effort to shore-up its declining elementary school enrollment, the tiny Montana Silver Rush town (pop. 840) is putting out a formal call for its next wave of pioneers - this time the New Millennium kind. The local Rotary Club and community leaders have launched a yearlong media campaign targeting the growing members of the new economy who can "telework" anyplace they choose.  Those workers include dot-com employees, freelancers and sellers on sites like eBay.  People who need only broadband, UPS and perhaps occasional trips through the nearby Missoula International Airport to make a living.  The town believes its blue ribbon trout streams, a 9-to-1 student/teacher ratio in its schools, a low-traffic hospital, hiking, hunting, skiing,  zero crime and a perfectly preserved jewel of a mining town are an unbeatable combination for young families seeking a more picturesque small town life. Men's Journal recently named Philipsburg "America's Coolest Town to Live in the Past" and many of the town's residents, new and old, think it is a perfect place to live in the future.”

What are we waiting for? Sounds perfectly charming, doesn’t it?

And it sounds like they’ll take anybody. Did you see it said freelancers?

Heck, not even the come-one, come-all Statue of Liberty specifically mentions freelancers.

If you’re like me, you’re probably looking out the window right now thinking, “Yeah, Montana. Why not? I can be just as broke there as I am here.”

There’s such an appeal to the idea of starting fresh in a town where no one knows anything about you.

They don’t know you were a dork in high school, that you were once busted for shoplifting or that your ex-wife left you for the slick plastic surgeon who installed the sporty new boobs she talked you into buying her for Christmas.

There should be a precise formula for individuals to gauge if they’ll be more missed where they live or more welcomed where they’re going.

We’ve lived here in Latrobe for 21 years and have deep roots. We have many friends here, are active in the community and if there are those who dislike us they must feel out-numbered enough to keep it to themselves.

But I think they’d love us in Montana.

Stay in any one place for too long and people are bound to take you for granted.

That happened with me just this weekend. I spent about eight straight catatonic hours watching U.S. Open golf from my big easy chair.

Any time I’d get up to go take a leak, I’d hear one of the girls muttered something like, “Geez, I thought he’d never leave.”

And it was Father’s Day!

I told some friends I was considering heading west. They said they’d hate to see me go. I said I’d consider staying if they agreed to begin mowing our lawn, cleaning our gutters and spending the weekends ensuring every resident has bought their share of Girl Scout cookies and copies of “Use All The Crayons!”

One said that was the kind of counter offer sure to help ease the sting of our leaving.

It sounds like Philipsburg will be happy if all we do is show up and send our kids to school and cheer for the home team.

Still, I was hoping for a bit more so I replied to the e-mail to see if the organizer would provide some gratis to sweeten the deal.

It’s been two weeks and I still haven’t heard back.

I guess maybe they’re more picky than they’re letting on.

Either that or my demands led them to confuse this freelancer with a freeloader and they’ve already got their quota of those.

Too funny, Chris! P-burg is my stepmom's hometown. Definitely worth a visit to check it out (if you can get them to "assist").

Ha! Big state/small world. The town truly does sound enchanting. I can envision many scenarios that would make relocating there appealing.

Thanks so much for reading, Henry. Have a great day!

I worked and lived in Philipsburg for years and found it a backward backwater. I started a business there and found the micro-politics of the town attuned to the micro-intelligence of the locals. Stay away!

Noted. Thanks for reading and sharing your insights!