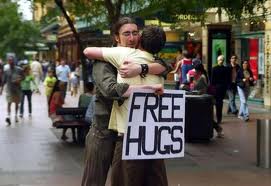 I was talking with an author friend of mine and we were discussing the writer phenomenon of being unable to remember the last thing we've written. It's true. If someone comes up to me and says they really enjoyed today's blog, I usually have to reminded of the topic. My friend and I agreed it's because we're so focused on what we're going to write next, not on what we've last written.

That's why I'm always so glad to see strangers rummaging around in the blog's attic. Closing in on 1,000 posts, I often forget some of the little gems from a few years ago. Ones like this May 2011 about the week I spent hugging lots of mostly ugly men.


(631 words)
I first noticed the alarming trend in a burger joint where I ran into an old buddy. He was with his teenage daughter and I was in a hurry and by myself.

We’ve known each other for about 15 years. Been to games together, played a little golf, drank a lot of beer.

He’s a damn good guy and we’re friends, but it’s not like I’d dash into a burning building to save his butt if he owed me fewer than $20.

That’s why I was so surprised by my reaction to seeing him.

I couldn’t keep my hands off him. I slapped him on the back. I squeezed his shoulder. Gave his arm a friendly rub.

Guaranteed, he’s dated girls for six months and not gotten that much action.

And I can’t explain why I did it. It’s not like he’s even all that good looking.

I’m becoming more touchy-feely and I feel like hitting myself for it.

It wasn’t just this guy either. I’m tossing my arms around guys who until recently I wouldn’t have voluntarily sat next to without first donning HAZMAT gear.

So far, the grabbiness hasn’t extended to the fairer sex. This is probably because I understand the ground rules are different with women.

Me grabbing any woman the way I’m grabbing men might send mixed messages that would lead to me either infuriating the woman or instigating some sly reciprocal grabbing that would justifiably infuriate my wife.

I can’t explain it.

Sure, I’m going through this difficult time with my mother and it’s making me more empathetic to my fellow man. I see stoics and wonder if they’re having some below-the-surface difficulty and could use a soulful hug.

That, I understand, is what some trauma can do to a person. But that can’t be it.

The Steelers losing the Super Bowl was traumatic, too, but I didn’t run around the bar suggesting me and the boys engage in a great big group hug to ease the sting.

And hearing Republicans say nice things about Obama has been disorienting. But I’m reluctant to hug any male Republicans for fear they’ll either legislate something discriminatory or announce they’ve been living a lie and want me to move to Vermont with them and start tending blueberry patches.

My father was maybe the most touchy-feely man who ever lived. He was like Barney the Purple Dinosaur with a 16-ounce Budweiser.

He would put peoples’ faces in his hands and pull them closer to express fraternal affection.

And he was widely loved. No one seemed to mind he couldn’t keep his hands off them. I always thought he’d have made an outstanding pickpocket.

Me, I’d recoil from his constant touching. I’m ashamed of it now, but I felt we were so close he didn’t need to keep touching my arm to get my attention.

That was before I became a father. Now I have a better perspective of his eagerness to touch something so dear to him.

I have two little girls and I can’t keep my hands off them.

I tell them the ingredients to any good and loving relationship are simply, “Play, tickle, cuddle, kiss, hug.”

And they’re very affectionate. They still crawl up onto my lap to watch movies and just giggle.

That’s fine with me. I hope play, tickle, cuddle, kiss, hug remain part of our lives for years and years to come.

I just don’t like the thought that I may one day be exporting those intimacies to all my buddies.

So now, in addition to my other troubles, I have this new me to worry about.

I may not like this new guy very much, but of this I am certain:

He really likes you.

Email ThisBlogThis!Share to TwitterShare to FacebookShare to Pinterest
Labels: is it okay to hug another man, men hugging men, mom with dementia, Pittsburgh Steelers fans hugging