The long, true story of my epic Game 7 pool match 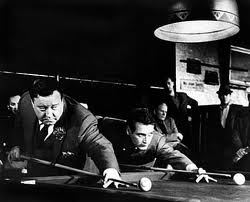 The two most exciting words in all of sports: Game 7.

The NBA just had a dandy and we NHL fans were just seconds away from another.

Game 7 means incredible pressure, high stakes performance and the chance to etch yourself into sporting history.

The happenstance had me thinking of my involvement in one of Westmoreland County’s greatest Game 7s ever.

It was 1991, about 10 years after I’d done anything anyone would consider even remotely athletic.

In fact, at the time I was a credentialed journalist, something I haven’t been for what will on Sunday be 21 years. Yes, in just three days my string of willful unemployment will finally be old enough to walk into a bar and legally buy itself a drink.

I guess it’d be too much to ask it to buy me one, too.

Back then I worked down the street in what was then the Latrobe bureau office of The Tribune-Review.

It was just me and another guy, he being my buddy, Paul, the guy who in just two years ruined me for office work for the rest of my life.

We worked the shifts we wanted, went to ball games, and spent hour after hour in the little bar that was so near that when both doors were open we could hear from our bar stools the phone ring in our office.

We’d take turns running over to see if any news was breaking. Then one day as if by magic, things got even better.

Paul brought in an old answering machine. In one fell swoop, he’d freed us from the phone’s ringing tyranny and found a way for us to drink beer and shoot pool for as long as we wished.

We shot a lot of pool back then. In fact, when they against my will moved me to the big office and I got fed up enough to quit, I told everyone I was going to try and make a living hustling pool, something believed by everyone except the people who’d actually seen me shoot pool.

But this was before all that.

I was still a gainfully employed local reporter responsible for covering school board and municipal authority meetings and breaking news. And I did all that, at least when it was Paul’s turn to shoot.

Part of our duties included having to go encourage local school children about a career in journalism. It was dreadful.

I’m all for helping our youth, but it became tedious trying to convince students that in 1991 the future of print journalism was bright and there were no digital innovations on the horizon that might threaten the stability of long, lucrative careers in newspapers.

Neither of us wanted to go through that again.

We agreed the only way to decide who’d go would be a best of seven pool tournament. It would be on the big regulation table at Bull’s Tavern in Ligonier, a great bar that would provide the benefit of sporting neutrality.

We had lunch and rolled to break at 1 p.m.

There were about a dozen people in there, none of them paying any attention to either of us.

But after Paul won the first game, the seriousness of our demeanors made some patrons start to watch. They asked about the stakes.

“We’re reporters,” Paul said, “trying to avoid having to stay sober long enough to go to the local high school to tell students they should become reporters. Loser goes.”

I’m not going to say the bar folk began calling friends to tell them they had to get to Bull’s to see what was shaping up to be an epic pool match, but it felt like that.

People began flowing in and each was told about the competition and the stakes.

Paul had his partisans, I had mine. Bets were being placed.

The pressure grew and grew as the rapt crowd would react to our successes and gaffes.

There were about 30 people in the bar by now and it had the feeling like any minute ESPN was going to break in with live coverage.

It was incredibly tense.

I remember as Paul racked for the decisive game, some guys who’d been strangers two hours previous were rubbing my shoulders and saying, “You can beat this guy. He thought he had you and now he’s scared. You got him right where you want him.”

I felt like Rocky Balboa getting the Round 15 pep talk from the Mick.

Then into the crucible we plunged.

It’s bound to seem like an exaggeration, but I do believe I now know what it’s like to play in a Stanley Cup Game 7 final. There was no room for error.

The match was past the 30-minute mark when I went on a run that looked sure to lead to victory.

I remember banking the four ball off the cushion and straight into the side pocket. The crowd went nuts.

But amidst the mayhem, only Paul and I noticed the overspin required to make the shot succeed sent the cut ball spinning clear down the table opposite the 8 ball.

I’d need to kiss the cue off the cushion nearly 9 full feet away or risk a scratch.

I chalked my stick and clapped a little talc on my hands. I was a trim 175 pounds back then, but it would have made perfect sense for all those people in Bull’s to call me Fats.

I stood back and surveyed the distance.

I bent and drew back the cue. You could have heard a pin drop. I swear even the jukebox stopped to pay attention.

It took about four seconds for the ball to cover all that green. Damned, if it didn’t look like a sure thing. I can still today, more than two decades later, remember the ball slowly rolling toward the cushion.

To this day, I don’t know how it missed.

But miss, it did, leaving Paul an easy lay up.

Paul? He was moonwalking.

I like to think I’d have been a more gracious winner, but we’ll never know. I can’t blame him for being caught up in the moment. If there’d been a big bucket of Gatorade, someone surely would have dumped it on him.

It was a day all who were there, I’m sure, remember.

Now here, to borrow a phrase, is the rest of the story.

Two hours later, Paul and I toddled out of the bar and were surprised to see a tractor-trailer sitting on its side not 50 feet from Bull’s parking lot. The bar sits at the base of treacherous Laurel Mountain, where the previous year another runaway truck had torn through nearby Laughlintown.

We two crack reporters looked at each other and kind of shrugged like, gee, there’s something you don’t see every day. We left to return to the office to see if there’d been any messages.

There had. Eight of them. All from our editor.

The first at 2 p.m. said, “Paul! Chris! There’s been a runaway truck up that nearly plowed through Bull’s Tavern! We need you both up there right away!”

The messages after that profiled what I guess you’d all a Bell Curve of urgency.

Our old editor was sounding like he wanted to reach through the phone and drag us up to Ligonier by our ears. But by about the fifth call an hour later, he just sounded bewildered: “Hello? Hello? Either of you guys there? Helloooo?”

The final call was pure resignation: “Uh, never mind about that truck. We sent somebody else.”

So intent were we on our pool match that neither of us ever even noticed breaking news when it had nearly run us right over.

Later the next week I was at the high school telling students about what they’d need to know to be reporters.

I don’t remember everything I said, but I do recall saying that their job will be much less stressful when they realize they should never be in any rush to hit the rewind button on the office answering machine.

Weddings, friendship & a pooka named Paul
Posted by Chris Rodell at 10:40 AM