Fab actress Holland Taylor folos my tweets; will you? 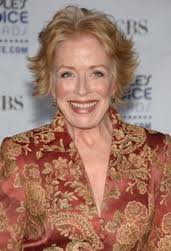 Actress Holland Taylor’s Twitter account indicates she doesn’t follow Nelson Mandela, Bill Gates or Pope Benedict.
She doesn’t follow Tim Tebow, Maya Angelou, Angela Merkel or the Rev. Harold Camping, the whack job pastor who said God told him he was going to end the world last May (favorite headline from that non-event: “Apocalypse Not Now!”).
Taylor, the ever-sexy and sassy co-star of hit shows from “Bosum Buddies” to “Two and a Half Men,” follows just 190 Earthlings including Stephen Colbert, Tom Hanks, Michele Obama, Frank Rich ...
And me.
Where this places me on the spectrum of cool is difficult for me to calculate.
But it will give me momentary bragging rights at The Pond, the friendly tavern beneath my Latrobe, Pa., office, after I explain what Twitter is, why any of them should care, and that Holland Taylor’s chummy with Tom Hanks and Charlie Sheen.
Last week I was surprised to find I was the recipient of a conspiracy of people who are trying to do what I’ve been unable for two years to do on my own: raise my Twitter profile. The ball, I guess got rolling, by @EditorialHell, a publisher who’s described himself as my biggest fan. Thank you, my friend!
He’s been advising friends to read my stories and achieved success with someone I’d never met who tweets as @TheDowagerSays. She wrote:
“Very few undiscovered gems left, but the writer Mr. Rodell (@8Days2Amish) is one of them. He’s odd, but he’s hilarious. And he can write.”
Sometimes -- and I’m not proud of this -- I will alter quotes about me to make them sound even more smashing. Or at least palatable.
They do this for all the Adam Sandler movies. For instance, a review that reads: “Adam Sandler is a perfect example of why so many lousy movies earn just one star,” will be transformed for promotional purposes to read: “Adam Sandler is a perfect movie star!”
But that lovely quote about me is genuine.
This enigmatic Dowager’s profile says she resides in North Yorkshire, England, and is dedicated to preserving “the moral and social structure of civilization.”

If you added “ . . . and being done doing so in time for my first beer by 4:30 p.m.” then that goal could be mine, too!
What caught my attention after a rush of new followers is that The One True Dowager is enjoyed by 7,469 followers, yet follows just eight herself. That’s uncommonly picky.
And I’m one of the eight.
Those numbers are stacked enough to penetrate even my dense understanding of basic mathematics: This Dowager is culturally influential.
So it was a fun evening watching a rush of new followers take the Dowager’s advice and follow me. It was a great surprise to see Holland, an actress I’ve always admired, do so, too. She’s just perfectly cool and so I was thrilled when the day after she began following me, she retweeted to her 14,278 followers the following tweet of mine:
“I understand if I pray for riches I’ll get nothing and if I pray for wisdom I’ll need nothing, but I can’t help it. I still pray for riches.”
I remain unsure of what twitter success will mean to my career, but if someone from a company that hires writers to compose fortune cookie notes says they want me after reading my tweets then that’ll be a significant boost.
So I’d like to extend this invitation to Holland Taylor, The One True Dowager and @Editorial Hell to come and enjoy dinner at our house on Saturday. The Westmoreland County Airshow is this weekend and you can enjoy the Blue Angels performing from the splendor of our back porch.
And to prove I remain egalitarian in my gratitude I’m extending the same offer to each and everyone who’s taken the time to follow @8days2amish.
All 172 of you!
I’d advise some of you to car pool. Parking promises to be a bit tight.
If you’re unfamiliar with twitter, here is my monthly @8days2amish round-up of what I think were some of my dozen best tweets:
• Devoted stationary salesmen are always pushing the envelope.

• It's indicative of innate verbosity attorneys feel obliged to include "at law" in titles. Nothing about them suggests "attorneys at play."
• I believe another consequence of global warming is that soon delightful little lightning bugs will begin to shoot actual lightning.

• Jim Crow racists used to call minorities who acted confident, "uppity." Did they call the ones who bent to their oppressions, "downity?"
• Has anyone ever researched if the CAPS key on e.e. cummings's typewriter was busted? That might explain a lot.
• So Trayvon Martin had pot in his system when gunned down. Maybe if George Zimmerman had some in his we never would have heard of either of them
• Forecasters predict warmest Mem Day Wknd ever. Don't believe 'em. Don't believe scientists, stats or your drippin' sweat. Believe Sean Hannity.
• His sense of irony intact, Donald Rumsfeld tells CBS he was "uncomfortable" with how Obama dealt with Khadafi and Libya.
• Told 5-year-old if you squeeze a piece of coal hard enough she’ll make a diamond. She squeezed so hard she almost made a turd.
• The very best bald-faced liars lack eyebrows.
• Honesty without tact is like brain surgery without anesthesia. The operation could cure, but the complications can kill.
• Redundant headlines say "Wildfires out of control." Of course they are. There's a reason they not called "tamefires."
• I'm such a reflexive pacifist the only thing I instinctively kill is time.
• Someday when I see a big "Welcome!" sign on someone's door I'm going to test owner truthfulness by marching in & making myself right at home
• Parenting advice from Elton John I consider sound enough to practice: Mars ain't the kind of place to raise your kids.

Honored! Unfortunately I am on the other side of the country otherwise this would have been a fantastic idea.

I confess the inevitability that few will accept is why I felt safe making the offer. One of these days, though!

I think it's a great offer and difficult too. Because most of the people of today's world are not habituate with this .It's really difficult to maintain. But if we maintain this effectively it will be a great beneficiary for us.