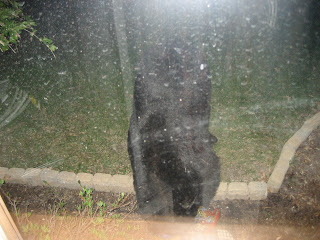 Let’s start with the bee and work our way up to the bear.
I haven’t told my wife this, but as fears I might lose my poisoned arm began escalating, I kept thinking to myself, “This never would have happened if I’d have just stayed at the bar. No one ever gets stung there. Smashed, sure, but never stung.”
But there are heroic elements to the story of my first bee sting of the year so I guess it was good that I was home.
Two days after snakes enlivened our morning, our 5-year-old had a little neighbor girl, a dainty little snowflake of a thing, up for playtime.
As we live in the woods with snakes, creeks and cliffs, we think it wise for one of us to be within monitoring distance in case one of the girls falls or needs one or the other of us to pretend we’re dragons.
That’s what happened with me. The girls were on the playset when Lucy yelled for me to come down for playacting that would end with me getting clobbered with whiffle ball bats that double as medieval swords.
I was unprepared for the pain that ensued after I saw the swarm. A bee hive had formed under the sliding board.
“Get down! Now!”
The girls couldn’t tell I was serious.
“Now!
I was grabbing for McKenzie when I felt an injection of pure pain on the meaty part of the right forearm.
Lucy had gotten away, but one stung McKenzie on the arm. She began to howl.
Still slapping at the angry trailers, I raced down the hill away from the swarm and toward her home. Her mother was right there and began to apply comfort and remedial triage.
My arm hurt like hell, but my first thought was, “Man, am I going to milk this: ‘Nurse, I need bourbon and cigars, stat!’”
Val applied some OTC bee sting stick stuff and we made an ineffective baking soda paste. I understand now I should have immediately taken some benadryl.
Instead, my forearm began to Popeye and for two days the crimson swelling began creeping up toward my shoulder. I began to wonder how much less productive I’d become if I had to learn to type and golf one-handed.
On Saturday, the swelling began to reverse and by the time I saw the deer the arm was returning to normal.
The girls had gone for a walk and I was preparing to cut the grass.
This will surprise any readers who consider me a sophisticate. Or maybe not. Most readers understand even sophisticates must answer nature’s call.
Living in the woods gives me an opportunity to do so naturally. I have a favorite rock that hangs out about 15 feet above the babbling creek. Deep in the woods, it’s the kind of place about which city dwellers and convicts dream. I often go there to think. Or to pee. Being adept at multi-tasking, sometimes I do both at once.
So I’m standing there on the verge of proceeding when I catch a glimpse of a beautiful doe walking up the stream about 20 feet to my left. And there in her shadow is the tiniest fawn I’ve ever seen. It looked mere days old.
It was magnificent.
The pair got to just beneath me before the doe noticed my presence. We stood there for 20 seconds, our brown eyes locked. It’s a sight I don’t think I’ll ever forget.
Then the she turned and dashed up the opposite bank. The fawn, with no sense of urgency, stumbled up after her slipping on the rocks on legs still too young to know their business.
I told the girls all about it, leaving out the part about why I was perched on the rock.
My ego is so massive I’m convinced the deer had a similar conversation with its loved ones later that evening, describing the magnificent man on the rock, haloed in sunshine, his fly down, pecker out.
We hadn’t seen a bear in two years. I’d written about it previously here and here in an in-depth piece about my fear of being mauled to death while taking a drunken pee from that same rock.
Josie and I were in the living room reading while Val put Lucy to bed. It was about 9:30 when we both heard something pop outside the big picture window.
I crept to the window and parted the shear drapes. The bear was the biggest I’d ever seen (the above picture was from two years ago, same spot).
And it’s impossible to convey just how unnerving it is to have a 340-pound omnivore just one foot from you on the other side of a double-pane window so thin I get jumpy when the 45-pound daughter gets too near it.
It had nimbly opened the little suet feeder dangling from the empty bird feeder and gobbled the mush in one neat bite.
Not wanting it to attack through the window, I went to the front door and shouted the only words I know bear understand.
“Scoot! Git! Ya! Ya!”
My experience with bear is that most of them are docile. This one seemed surly, as if it was displeased by our brand of suet, which may be an indicator of ursine tastefulness. I always buy the cheap stuff.
It lumbered away on all fours, but it seemed pissed.
Who knows what woodland adventures await us as the long summer beckons? All I know is we as a family will grin and bear it.
And recent experiences mean I’ll be extra careful about where I bare it.