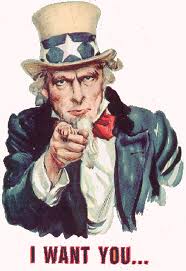 The iconic American symbol turns 200 this year. In all that time, there’s zero evidence he’s ever had a romantic relationship with a single woman. For the healing benefit of our national character, I think it’s time to ask the question:
Is Uncle Sam gay?
There is stereotypical evidence this could be the case.
He’s never been married or fathered a child, and he’s spent the last 100 years actively soliciting the company of strong young men.
He’s often appeared in orchestrated photo ops with Miss America, but that could be a ruse, a rare example of a man with a goatee needing a beard.
With behavior like that, I’m surprised the snoops at National Enquirer haven’t included him in the bi-annual gay/not gay round up that features questionable profiles of actors like John Travolta and Tom Cruise.
Uncle Sam was born during the the War of 1812. The nature/nurture circumstances of his upbringing have no bearing on this topic, but if you want to read about it you’re welcome to scan this Wikipedia entry here on the character’s inspiration, Mr. Samuel Wilson of Troy, N.Y.
Wilson was a meat inspector.
Will those of you with the senses of humor that never escaped junior high please stop snickering?
If he is gay, he would be the most enduring example of what I call a “slomosexual,” which I define as any person who devotes his or her life to the self-proclaimed virtues of public heterosexuality before finally coming to grips with their true sexual identity.
I wonder if he thinks we’d not forgive him the hypocrisy of all those decades of recruiting mostly young men to serve with the prejudicial stipulation that none of them be anything but lady-loving heterosexuals.
He was adamant that each of his recruits be eager to kill fighting men, not love them.
The question of Uncle Sam’s sexuality may be a sensitive one for many. Patriots may believe it should go unexamined.
Don’t ask, don’t tell, you might say.
Nonsense.
The U.S. Supreme Court is bound to soon consider the question of same sex marriage. His sexual orientation will help clarify the arguments.
But it’s more important on an individual level for this great man. If Uncle Sam’s gay, hiding it may be a source of pain that should concern every American.
It’s not too late for him to find happiness with a soul mate. The restless matchmaker in me says we should fix him up with another eccentric uncle who always seemed to prefer the company of men over women, that being Uncle Charlie from “My Three Sons.”
Of course, it’s impossible to calculate the the consequences this will have on some Americans who are sure to react as if they learned John Wayne enjoyed breeding poodles.
They will be hurt. They will be mystified. Their core values will be shaken.
They will feel, Uncle Sam, as if you’ve betrayed them.
They will be wrong.
They will have betrayed you.
Posted by Chris Rodell at 10:34 AM