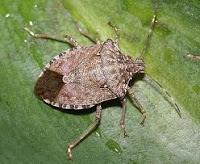 I wonder if I’m on the verge of becoming the Oskar Schindler of the stink bug. I realize the risky analogy is over-the-top, but I just don’t see anyone doing what I’m doing on behalf of the stink bug, which mostly involves resisting the urge to squash ‘em.

Maybe it’s because I feel a sort of kinship to the stink bug -- and talk about your risky analogies.

I think if people took the time to understand the stink bug, they might learn if it has anything to offer or maybe read its stink bug blog.

Of course, unlike me, the stink bug isn’t suffering from under-exposure.

No, stink bugs are like the U.S. Congress: high visibility, abysmal approval ratings.

As if dedicated entomologists can be anything but bug-eyed.

They say stink bugs were introduced to Pennsylvania -- “Stink bug, meet Pennsylvania!” -- in 1998. Like so many other crappy goods we purchase to our national detriment, the stink bug is a Chinese import.

They are a problem here and in 34 other states precisely because they do what are increasingly obese children do not: they eat fruits and vegetables.

There’s a lot to be said for that. I golfed the other day and was inundated by lousy black flies. They bit my exposed skin and did true nose dives into my nostrils.

Tank-like stink bugs are much better company. They are very live-and-let-live.

The only time the stink bug offends non-farmers is if you kill it, an action which liberates its stinky soul to I guess rise up to heaven where I’m sure the chosen have been scrambling around for things like nose plugs and the heavenly suggestion box.

Sure it’s sort of creepy to have something so alien, so offensive and so potentially stinky in the house, but our children are all those things and we don’t suck them up with vacuum cleaner attachments.

It’s never been studied, but the stink bug may actually be the intellectual superior to the average kid. Think about it.

These are true in-sects, as opposed to the bugs that prefer nature (I’ve for years tried in vain to get people to call them “outsects”).

The stink bug spends its entire life trying to get into our homes.

Our children spend their childhood trying to get out of our homes. It is my understanding -- and personal history -- that this behavior lasts until we’re about 22 and decide to find homes of our own.

Then, and again this is just from my own experience, we return home for a six- year mooch until Mom refuses to do another load of laundry.

So there’s a reason why they’re not called stupid bugs.

Instead of killing stink bugs, we ought to appeal to their apparent intellects and train the ones that invade our homes to eat our unhealthy leftovers.

That way, like us, they might die of massive heart attacks, which I would guess would keep their stink intact.

Being a clear-eyed visionary in every regard except where it comes to my own income, I wonder about the evolutionary future of the stink bug.

The world climate is changing rapidly and I’m concerned the sudden rapid rise of the heretofore unknown stink bug might be a portent of future change.

Forget Global Warming. Could the world be on the verge of Global Stinking?

That could be catastrophic. It could lead to social upheaval. Civilization could plunge into reeking chaos.

In a rare display of remarkable consistency, Friday will be exactly one year from when I wrote my first loving ode to the beleaguered stink bug. I may flip-flop on any number of issues, but I’m steady on stink bugs. Check it out if you haven’t gotten your daily fill of stink bugs already.