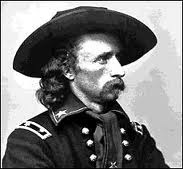 Second, I know the instant I type “general custer’s penis” into a subject line it may awaken a sleeping automatonic army of Custer devotees who stir when the computer pings over that very subject.

So what are we to make of this man once so beloved by his contemporaries and today reviled by those of us who abhor war crimes and injustice? What would we say to his spirit?

The title got me -- in case you are doing some market research. Interesting post.

Yes! My "research" indicates if I put some variation of "nude" in the headline, I'd be one of the most well-read writers. Thanks, Bruce, for checking in. I'm flattered you took the time to read and comment and hope you're doing well.

When Custer drew his erect penis on notes to his wife, he was telling her that he had a little big horn. Ha ha! Get it?

Ha! Love it. Wish I'd have thought of that. By the way, that was Capt. Benteen, not Custer, which doesn't diminish the humor one bit.

I'd love to know what your source is for the Benteen letters. I can just imagine the look on the face of the historical researcher who found the letter in question...

Oh, that's a great question, CapnCrystal. I gleaned it from the Philbrick book I cite, but it would be great to learn the story of the original scholar who found it. Hilarious. Thanks for reading!

Interesting post...I read Philbrick's book a couple years ago...one caveat: I think he was criticized for near-plagiarizing of other historians' work....still it's a good read and summation of much of recent work ....
by the way, Custer and a couple others cut their hair in Bismarck's Fort Lincoln before leaving for the Little Big Horn campaign....so he didn't have long locks when he died...

Thanks, Tim, for the education and the thoughtful comment. I didn't know that of Philbrick and will be disappointed if it turns out he did.

I crossed Doris Kearns Goodwin off my list when she was busted doing the same thing. Can't stand that.

And I'm disappointed to learn Custer died with short hair. Ruins my story!

Thanks again for reading and giving me so digging to do. Hope you'll stop by again.

Do you want a longer and thicker penis without expensive surgery, extenders or suction devices that just don't work?

Introducing the Penis Enlargement Bible, a 94 page downloadable e-book that has an exclusive two step system that can growth your penis by between 2 and 4 inches within 89 days using safe natural methods.

The methods and techniques in the PE Bible are exclusive to this unique program. The two step system involves low cost off the shelf natural supplements and a specially designed exercise program. Many users experience gains of almost an inch within just a few weeks of starting this unique program!

Imagine having 2-4 inches of extra length and girth added onto your penis size, this Penis Enlargement Bible makes it possible. Over 5000 copies of this product have already been sold, and unlike most products on the market there is real video proof from actual users that show REAL results. You can see the video here: ===> Forget Surgery, Pills And Extenders <=====

Forget about surgery, pills and weights, they DONT work! This DOES work, but you need to follow the methods contained in the guide.

But don't take my word for it, click here to see actual video proof and testimonials from REAL users:

He was hardly an inept general. Your military knowledge and background must be non existent. A little less infatuation with penises and a little more studying hero

None of that was correct about what happened. Stop sucking dick it’s making you stupid

It was all wrong

None of it was true

No sources cause he is full of shit. It’s half rumors and half lies

Get a grip! It's an interesting side note for speculation. *Also, it's "lose" - not "loose" in terms of our military being victorious or not.