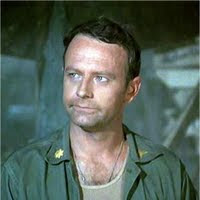 At Christmas, many newspapers are of the custom to re-publish verbatim the original Francis Pharcellus Church editorial, “Yes, Virginia, There is a Santa Claus,” from the New York Sun in 1897.
It has become my custom to on this day to re-run verbatim my 2009 post celebrating the birthday of Maj. Frank Burns. He would have been 72 today.
I realize it’s kind of lazy, but I think I exhausted the topic last year and without the benefit of a spiritual seance will have nothing to add.
So here I re-run my salute to Frank Burns.
Later today or tomorrow I’ll come back with something fresh and relevant.
I’m thinking something about if dogs can be retarded!
Take the day off and do something incompetent and mean-spirited: It’s the 72nd birthday of Maj. Frank Burns!
Larry Linville, the man who crafted perhaps the most indelible character in American pop culture, was born on this day in 1939. The five-times married Linville, whose only other claim to fame was, coincidentally, a series of ill-fated romances aboard the fictional “Love Boat,” died April 10, 2000, at the age of 60.
But to me at least, ferret-faced Frank Burns will live forever.
It’s a measure of the esteem in which I hold Burns that when Matt Lauer saluted former Today Show colleague Bryant Gumbel on their shared birthday, I thought of calling up and demanding equal time for Burns.
M*A*S*H remains one of the most endlessly fascinating TV shows in history.No other show has ever ranged the gamut from fall down funny to train wreck terrible. From 1972 through 1983, the show was compelling, sometimes for all the wrong reasons.
Many argue on www.jumptheshark.com about when the show leaped the great white maneater.
Was it when Klinger stopped wearing dresses? When B.J. took over for the incomparable Trapper John? When the insufferable Sidney Friedman became a fixture? Or was it when Col. Blake’s plane nose-dived into the South China Sea, a riveting episode that to this day lands like a punch to the solar plexus.
The show took hits with all those dramatic transformations.
But nothing caused the essence of the original hilarious premise to leak out of the storied series like when they lost Frank Burns.
He was the moralizing prig who cheated on his wife. He was the flag-waving patriot who stole purple hearts from wounded soldiers for his own self-glorification. He was a bumbling doctor who kept getting promoted over worthier physicians.
I’ll never forget the episode when Radar was a budding writer doing an assignment about amusing anecdotes. Burns told a story about growing up in Indiana next door to a little wheel-chair bound boy named Timmy.
With evident glee, Frank tells of how Timmy was happily waving at the Burns family when he lost control of the chair. It plunged down the stairs, across the lawn and crashed the flailing invalid into the Burns family sedan.
He cackles witch-like through out the storytelling as B.J., Hawks and Radar listen in horror. When he concludes, B.J., the designated voice of conscience says, “That must have been awful!”
Frank says: “No, he just scratched the paint a little.”
Then he gets furious when the cheerful buddy-buddy reaction he’d sought results in scorn.
It’s brilliant. It combines a kind of malevolence and mean-spirited pettiness that used to unite the nation.
Today, all our bad guys divide us. You either love Barack Obama or hate him. Same goes for Sarah Palin.
Even deliberately cast evil doers like Montgomery Burns and Tony Soprano have their rooting sections.
That’s why we need more men like Frank Burns in our lives. We need people so bumbling and loathsome that the whole world can point our children to and say, “See that man in the white smock with the stethoscope. He’s pure evil. You don’t want to be grow up to be like him. He’s a mean, cheap and selfish stooge from whom no goodness results.”
So today, in honor of the great Frank Burns, I’m going to try and do something incompetent and mean-spirited.
Looking back over this incoherent blog post, I can surmise the incompetent part’s already taken care of.
Now, the hard part. Can I go against my gentle nature and do something deliberately mean-spirited?
I suppose while I’m thinking about it, I could call up Matt Lauer and demand he salute Frank Burns, too, instead of his suck-up buddy Gumbel, the egotisical poser who’s been on the fast track to Nowheresville since leaving the Today Show and whose head is becoming so big he ought to be called Giant Gumball.
Hmmm . . .
Maybe this mean-spirited bit won’t be so difficult after all.
Posted by Chris Rodell at 11:47 AM