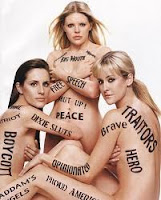 The interview could have taken place on any number of cable news programs involving any number of Capital opinion mongers. This one happened to take place Saturday on MSNBC with Pat Buchanan.

I agree with almost nothing the far right Buchanan ever has to say, but I listen to him because he’s thoughtful, witty and unafraid to challenge GOP dogma, as evidenced by his lone wolf opposition to the Iraq War.

The weekend was awash in poignant recollection of the 9/11 attacks that so unified the country as few of us had ever seen.

What happened to that unity, Buchanan was asked.

“I think you started to see it come apart on the night of the 2002 State of the Union address when President Bush started talking about the Axis of Evil and began laying the ground work for war with Iraq,” he said.

Is there anything that can be done today to restore that national unity?

Or maybe I just tuned out when he didn’t blurt out an answer so obvious it goes unaddressed.

Somebody needs to say they’re sorry. Say you made a mistake, a real whopper.

I think it would be beneficial to the national unity if even just one of the cheerleaders for the $3 trillion Iraq War would just say, “Oops!”

By now, they’ve all -- Bush, Cheney, Rove, Rumsfeld, Tenet, Rice, Wolfowitz, that whole smarmy gang -- published their blame-shifting books. But no one’s said they were sorry.

This may seem a precious sort of point along side the grim statistics (4,400 U.S. soldiers, 32,000 injured; more than 100,000 Iraqis dead), but my feelings are still hurt over what was said about those of us opposed to the war.

John Ashcroft said anyone who dared to question the Bush administration about the motives for the war was a traitor.

Chicken hawks Cheney and Rush Limbaugh hinted that anyone who opposed the war was what hard men in locker rooms call a “pussy.”

Ten years ago today I was consumed with blood lust. I wanted vengeance. I wanted Osama bin Laden’s head on a stick.

The tragedy of the Bush administration is how it never chose to finish the one job with which the entire country entrusted it.

Imagine how Bush would be viewed today if he’d have kept his eye on the ball, killed bin Laden and cleaned up Afghanistan before dividing the armed forces in another treasure-sapping foreign conflict.

Bush’s speech at Shanksville was marvelous. It made me recall when he stood atop the rubble vowing revenge we all craved.

The only conclusion I can come to as to why they got so far off track was Karl Rove needed a 2004 re-election strategy.

And war in a Iraq was a dandy because a still-scarred nation would rally around our soldiers and woe to anyone who said whoa to politically manufactured war hysteria.

So it would be nice if someone would apologize for calling us stooges for believing Hans Blix, Scott Ritter and the United Nations when they said they needed more time to verify WMD were in Iraq.

I’d like to hear someone apologize to Valerie Plame for ending her career at the CIA because her husband was disputing Cheney’s murky contentions about yellow cake uranium from Niger.

I’d like to see Toby Keith go on the air and say, you know, in the heat of the moment maybe it was a little crass to beat up on the Dixie Chicks for expressing a heartfelt opinion.

I’d like to hear anyone who made fun of anyone like me who said it just might not be the cakewalk they’re saying it’ll be say, man, you were right. It’s been a bit of a bitch.

I really think that would help elevate the national discourse, because I’m ready to forgive you.

But without that apology, it just seems like you all went from cheerleading a historic fiasco and straight into Tea Party birther movements without acknowledging you were dead wrong on the single biggest issue to face this entire generation.

The Iraq War has been a disgraceful mess from the start and it was all your fault.

And if I’m coming on a wee bit too strong at a time when we’re all straining to recover the unity and common ground of post-9/11 America, let me say I’m sorry.

Try it some time. You might feel better.
Posted by Chris Rodell at 11:38 AM

My sentiments exactly. Just saw your article about the Kinzua pilot and was checking out your blog.

Hey, thanks so much. That's very pleasing to me to hear that's how you found the blog. I hope you'll stick around. It doesn't pay, but I have a ball with it and work to keep it lively.

I remember my Dad parking his 57 Chevy below the bridge and climbing up about 1962. Mom and we kids watched in the hot sun apprehensively. Kinzua has always been a mythic part of our family lore. It was a pleasure to read your write-up. And, i agree w your views of the undeclared gutless mess created in Iraq. It has bankrupted us morally and otherwise. What went around is coming home to roost...

I couldn't be more pleased with your comment. It means something lured you to my website, made you want to read more -- and you agree with me!

I hope you'll stick around, friend. I'm happy to have a reader with Pennsylvania connections and a great family story or two to share.