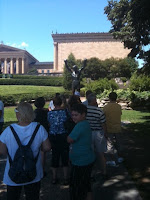 I’m in a Philadelphia hotel full of romance novelists and the only stranger who’s inspiring any real love is a 70-something nun.
Good thing I’m not on the make.
More than 700 romance novelists are nothing like you’d expect, that is if you’d expect romance novelists are like the vixens on the sexy covers of the bodice-rippers they all pen.
They look homely, fatigued and they seem to talk endlessly in elevators about how clever each of them is.
In short, they’re a lot like me only with successful careers in the writing field.
What they do makes what I do seem like small potatoes.
I’m here for three days with my family to do a story on the world’s toughest restaurant.
That’d be the 107-year-old Moshulu at Penn’s Landing. It’s been docked there along the Delaware River since 1996. It’s sizeable enough to satisfy the appetites of up to 2,000 diners a night in the exquisitely appointed spaces that used to be dreary cargo bays.
That’s heavy duty for fine dining, but it’s sissy stuff compared to what she’d been doing.
She traveled around Cape Horn in the world’s fiercest weather 54 times hauling coal, coke, copper ore, nitrate, lumber and grain. She was confiscated by Americans in one war and the Germans in another.
She’s clearly seen bringing immigrant Vito Corleone into New York harbor in “Godfather” and going toe-to-toe with Rocky Balboa in that classic.
We had a blast on board, and neither of the kids nor their father did anything that would cause the maitre d to make us walk the plank.
I love coming to Philadelphia for reasons the romance novelists try to inspire.
My top two man crushes will live forever in Philadelphia.
The first, of course, is Benjamin Franklin, a man so cool it’s a confounding surprise to learn he didn’t invent sun glasses.
He’s the Founding Father whose conceptual fingerprints are today on everything from the way Americans deliver mail (hang in there, USPS!), heat homes, fight community fires, patronize libraries, and, not incidentally, lead and inspire a world that before Franklin was uniformly ruled by monarchs, chieftains, and spiritual poobahs who wielded power based on an alchemic brew of birthright and superstition.
But to me his greatest invention often goes unmentioned.
Ben Franklin invented America.
He’s the spark that ignited the flame that became the American spirit. He’s can-do and no quit. He’s self-made and selfless. He’s Free Speech and free hors d'oeuvres. Pulitzer Prize-winning biographer Stacy Schiff describes him as “equal parts Franklin Delano Roosevelt, Ronald Reagan, and Bugs Bunny.”
My other love is for the fighter who by one sacrilegious standard is the greatest fighter in history. Sure, Muhammad Ali beat Joe Frazier, but Rocky Balboa, Philadelphia’s underdog everyman, is on some score cards kicking the butt of historical heavyweight Benjamin Franklin.
“To many people Rocky Balboa has become the identity of Philadelphia,” says Meryl Levitz, president of Greater Philadelphia Marketing and Tourism.
You sense that at the steps to the Philadelphia Museum of Art where the strains of “Gonna Fly Now” still reverberate. Running the Rocky steps is one of the history-rich city’s biggest tourist attractions. Books have been written about what it means to people who scale the steps.
Jo-Jo and I did on Thursday. We ran clear to the top then duked it out on the spot where Rocky does his triumphant dance.
The 10-year-old disputes the result, but I contend the scorecards have me kicking her butt.
That was far from the best ass-kicking story told near the Rocky statue that day.
That would be the nun.
The Rocky statue is in a little park-like area just off the foot of the steps. There was a line of people about 20 deep waiting to take their pictures in front of the statue.
There were old and young, tattooed and reserved, the whole human panoply.
Still, the nun with the tripod stood out.
She was in line behind us. We didn’t even know she was there until we’d snapped our pictures.
As we walked away, we saw her set up a tripod; she was all alone.
We turned to watch and soak in more of the joyful atmosphere.
This frail, slight woman stood before the triumphant statue and raised her hands.
She yelled, “I beat cancer this year and this picture is going to be on the front of all my Christmas cards!”
And that’s the abbreviated story of the nun who loved Rocky.
Think you can beat that one, you published honeys of the romance novel world?
Go ahead. Take your best shot.
Posted by Chris Rodell at 4:14 PM