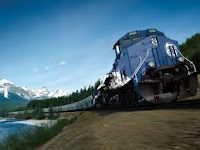 ABOARD AMTRAK’S THE PENNYSLVANIA -- I love having the opportunity to slug a story of mine with a dateline.
“Dateline” is an old-fashioned journalism term for the all-caps story tag that used to include the date along with the place where the story was filed. It’s also the name of a new-fashioned investigate show where they resort to questionable tactics the likes of which old-fashioned journalists often disapprove.
The cool thing about a dateline that starts with “ABOARD . . .” is it makes it seem like I’m some kind of dashing war correspondent.
If you think that couldn’t be further from the truth, you’re mistaken.
I am a war correspondent.
I’m covering a war on boredom.
We are about six hours into an 8-hour trip through tedium clear to Philadelphia. Right now tedium is near Lancaster.
The girls out of childish habit say they are bored.
They are lying. They are fully alive.
They’ve just never been confronted with an opportunity to revel in the joyful boredom only a long train ride can bestow.
“I’ve ridden everything with either legs or wheels and nothing beats the train.”
That’s what an old friend of mine, John Clouse, once told me before he died. He was not lying. And that man was fully alive.
He was for years listed in the Guinness Book of World Records as the World’s Most Traveled Man. I wrote maybe a dozen stories about him for everything from National Enquirer to Playboy because this veteran of the Battle of the Bulge was one of the most gregarious and entertaining men I’ve ever known.
The idea of watching 4 to 6 hours of television a day as a way to banish boredom was anathema to him.
The girls haven’t been bored once today. Rather they’ve been challenged to avoid boredom.
We arrived at the convenient Amtrak station in Latrobe about 30 minutes prior to the train’s scheduled 8:11 a.m. departure. There were about 20 people, three-quarters of them passengers, waiting.
“Is it ever going to get here?” said Josie, 10, cueing Lucy, 5, to commence the same whine.
They were confusing boredom with a moment that absolutely crackles with excitement: standing at a train station and waiting to hear a distant whistle.
At 8:10, a man who was probably steeped in boredom said, “See, it’s late,” an instant prior to hearing the whistle and seeing the headlight coming ‘round the bend.
It was right on time.
It’s a mechanical marvel that something so big, so loud and so muscular as a locomotive can seem so welcoming when you step inside of it.
“All aboard!”
Taking a train on vacation is like taking a vacation from the hassles of taking a vacation.
You can nap, you can read, you can talk, you can anticipate.
I told Lucy we were going to Philadelphia, birthplace of America. She asked if we’d get to see the hospital where it was born.
I never feel any of the apprehensions I feel on an airplane. If the engine on a train gives out, we just roll to a gentle stop.
The girls are beginning to think of the train like it’s a rolling prison and they are beginning to embrace the novelty of it.
Because it is boring and boring in our distraction-mad world is becoming a precious commodity.
Our nearly 8 hour trip will be maybe an hour too long. Maybe not.
The girls are still pressing their little noses up against the windows and waving at the smiling people at the crossings. They’ve spent the hours reading, playing cards and cuddling with us when the air conditioning got too efficient.
We ate in our seats the lunches we brought from the only fast-food restaurant that allowed us to continue the track theme of the day: Subway.
The girls are eager to get to Philadlephia, but have really enjoyed the trip and will be looking forward to the return ride, which will be maybe two hours too long. Maybe not.
I know now we’re embedding a memory that will have them loving the train the way Val and I do.
“All aboard!” is the phrase most associated with train travel.
Maybe it should be “All are bored!”
It’d be an excellent way to increase ridership.
Posted by Chris Rodell at 8:46 AM

My grandfather worked on a train for a while, and both my father and brother are kind of freakishly obsessed with trains. Model trains. Real trains. Family vacations to Altoona and Chattanooga? Oh yeah. Done that. I love a train ride. :)

Did you ever watch The Sopranos? Bobby Bacala was a real train nut, too. I don't think I'm like him or your dad and bro, but I can see it.

Thanks for reading Emily!