Dream job: Some of my recent stories 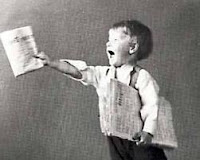 The following is the most memorable of the all the hundreds of reader comments from six of my msnbc.com stories published over the past month. It was signed, “Stop the Hypocrisy.”

“When I grow up, I wanna write fluff pieces just like this for a major news organization and get paid for it. Beats workin’.’’

I was at party yesterday chatting with a friend about our boyhood days when we both used to deliver newspapers.

We talked about idiosyncratic customers, cheap tippers, and the youthful steadfastness it took to put the newspapers behind all the doors on the days when it was about 2 degrees outside.

Today he has a successful landscaping business and I’m wishing I could resume delivering newspapers.

I used to make about $150 a week delivering the old Pittsburgh Press. Good loot back then.

What’s surprising is that’s just about what I’m making now writing stories for what by every measure is one of the world’s more prestigious news outlets, and the only one that combines the titans of two industries, Microsoft and NBC.

Wow. You’d think working for them wouldn’t make me nostalgic for the days when I used to deliver newspapers.

But I doubt anyone wants to read another selfish rant about my inabilities to earn a decent living. Whaaaa!

So I think I’ll just list links and observations about some of the stories I’ve really enjoyed doing. And I really have.

• Pittsburgh’s Cartoon Museum -- I’m always thrilled to do a story promoting any Pittsburgh business or attraction. As I do with every story, I dutifully alerted the two businesses mentioned in the story and thanked them for their cooperation. Neither responded and that’s just downright unneighborly, especially for a city that likes to claim Mr. Rogers as its own. And he’s not, you know. He’s like me, from Latrobe, where good manners still matter.

• Stargazers seeking new Dark Ages -- This one was great fun and is, I think, the kind of story I’ll be able to use over and over again with different publishers for the next 20 years or until light pollution disappears. I liked the lead on this one too for the way it combines Biblical allusions with secular realities. The GOP could use a little bit of that sort of thing.

• Cricket spittin’ & other wacky fair stunts -- The “Stop the Hypocrisy” guy is right. Getting paid to write this kind of stuff is really fun. I just wish I could get paid more. This story, too, gave me what I thought was a good blog item about Rick Santorum and Man Marrying Dogs. That’s very important to me. The surge in readership lately has me believing the blog will eventually earn money and that would be a wonderful solution to so many of my difficulties. I hope you’ll help make it happen by referring the blog to friendlies and influentials.

• Hot As Hell? Try Cool, California -- This is the fluff piece that so upset the reader whose name demands the cessation of hypocrisy. Really, me and this guy have so much in common. We both want to get paid for writing nonsense. We both despise people saying one thing and doing another. It is odd he’d want to say something hurtful about someone with whom he should be collegial.

• Berlin Wall 50th anniversary -- If you’re going to read one story of this batch, this is the one. It’s downright scholarly. It combines travel with history and social observation. I tracked down some great sources, one an MP from Checkpoint Charlie the night the Berlin Wall went up, and the other a former Berlin law student who risked his life helping 68 East Germans escape to freedom. Lots of great comments to this one and not a snarky one in the bunch.

• Mississippi Riverboat cruising making a comeback -- I was very pleased they assigned me this one. It really allowed me to immerse myself in some great Mark Twain history and get to know head Twainiac Cindy Lovell, director of the Mark Twain Boyhood Home & Museum. This is another one that filled my plate with so many great story ideas I hope to farm out to other outlets.

So there’s a list of some of the things I’ve been working on in my professional capacity.

The stories get great reaction and one day when I grow up I want to write fluff pieces just like them for a major news organization and get paid for it.

I enjoyed reading your post and found good information here. When you don’t have an idea of what you could sell through the online environment or don’t have the financial capital required to make an investment into these products, an alternative choice can be available with online affiliate marketing.