Bugs are buggin' me 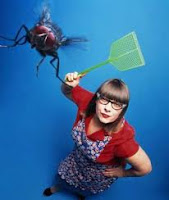 I don’t understand how out of all the world’s winged creatures, the magnificent and the mundane, the one that’s attracted to dog poop and picnics is designated “the fly.”

Jeff Goldblum was “The Fly” in 1986 and there hasn’t been a fly swatter big enough for him, and that includes his gargantuan ex-wife Geena Davis.

Insects are driving me buggy even as bugs are incapable of driving me insecty.

I drove my buggy up to the far northern reaches of Pennsylvania this weekend and was chewed upon by maybe a million black flies. I had an otherwise splendid time golfing with my cousin’s husband and his buddies in Warren near the New York-Pennsylvania border.

None of the bug sprays worked, but on Saturday night I consumed nearly a fifth of Jack Daniel’s and the next day none of the black flies came within eight feet of me.

Of course, neither did the white golfers.

It’s one of those parts of the country where black flies outnumber black guys by maybe a billion to zero.

I’m sure there are some local racists who are comfortable with that ratio.

Not me. I’ve never had a black guy try and zoom into my nose, my mouth, my ears, my tear ducts or linger near my crotch while I was trying to sink a four-foot putt for par.

And I’m not being politically incorrect. The nasty little buggers are widely known as black flies.

As far as I know there are no African-American flies, nor white or Caucasian flies, for that matter. It seems odd because there are Spanish flies and they’ve made colorful contributions to history and sex, two of my favorite topics.

In ancient China, crafty warlords mixed Spanish flies with arsenic, wolfsbane (a mountain herb) and human excrement to make the world’s first stink bombs. Why you’d have to mix anything with human excrement to make it smell worse seems to indicate the military-industrial complex were padding defense budgets about 2,000 years before Halliburton.

I certainly wouldn’t want some Chinese warlord to lob one through my car window, but the historical anecdote makes me nostalgic for the pre-nuclear days when wars were fought with what can best be described as weapons of ass destruction.

And on the other usage extreme, Spanish fly is regarded as the world’s oldest aphrodisiac.

Augustus Caesar’s wife, Livia, was said to have slipped Spanish fly into guests’ food hoping to inspire a randy indiscretion she could use for later blackmail.

I knew a nervous freshman in college who was obsessed with trying to obtain Spanish fly for the same reasons as de Sade. He’d convinced himself giving doses of the extract to young women would make their clothes fly off.

When he became frustrated in his pharmacological pursuit, I suggested he try poems and peach schnapps.

I heard he got married and had five kids.

Either way, he never bugged me again.

This is the time of year when I can’t wait for summer to end. The heat’s oppressive, tempers are short, and the only thing more burned out than my lawn is my enthusiasm for doing anything outdoors.

Every time I step outside the skeeters, wasps and flies descend and I commence to spittin’, sweatin’, swearin’ ‘n’ swattin’.

The neighbors must think I’m some kind of sadist as they see me slapping myself to annihilate the bugs that are bugging me.

If anybody ever hits me as hard as I hit myself I’ll start researching internet stink bomb recipes.

You might think from all this I uniformly hate all bugs. Not true. Bugs make the demanding cut in my list of three favorite Americans (Ben Franklin, Mark Twain and Bugs Bunny).

I’m busy as a bee and I gotta fly.

Funny stuff, and much appreciated. Lots of great wordplay!

Interesting how many posts I'm coming across that have some similarity of topic. Mine has a bug mention or two, also.

Hey, welcome back, Suldog! I see you're back at it again. Very good. I was hoping you wouldn't stay away for long. I've re-admitted you blog to my blog roll and am looking forward to seeing what you've been up to.

It'll be good to catch up.

Thanks for reading and recommending my stuff!