Sunday Re-run: "The Christmas when romance (& me) were Frosty" 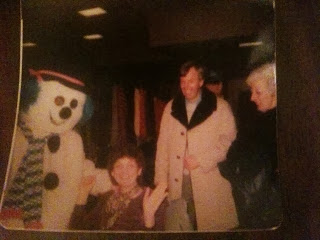 Ah, the sweet recollections of youthful romance. This is from '13 and is about the holiday season I spent dressed as Frosty and a soon-to-be-divorced 30 year old had the hots for me, as dangerous a combination as there is.

We were neighbors with a friendly woman who did the hiring at the old Kaufman’s Department store in Century Three Mall. She said she had a job for which I’d be perfect.

I wish someone would have preserved the films from the security cameras monitoring our conversations. I’m sure it would be hilarious, her talking earnestly about her crumbling marriage to a stranger snowman. Me nodding my giant top-hatted head in empathy.