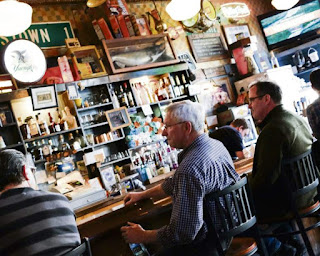 The avalanche of world-wide media declaring the Tin Lizzy is a bastion of rabid Trump supporters is clearly fake news.

How can it be a bastion of Trump supporters?

Sure, on many Friday nights I’m outnumbered about 250-to-1 — but don’t believe the polls. And winning the popular vote is so overrated. Bigly.

Since just before the election, the Tin Lizzy and the nearby Trump House have been featured in news around the globe. That’s no exaggeration. Just last week, there was a film crew here from Germany.

To much of the world, Youngstown, Pa. (pop. 320), is Ground Zero for Trump supporters.

And Sunday, a front page story ran in my old newspaper, The Tribune-Review, under the headline: “Trump voters take inventory after his first month in office.”

The article quotes many of my Trump-loving friends and included two pictures that drew scornful remarks in the lively reader comments section including this: “These photos above are exactly what I've always imagined for a Trump supporting environment. So many racist hickabillies & elderly people.”

I take exception to the prejudicial jibes for personal reasons.

I’m in the picture!

That’s me on the right.

Now, regular readers know I’m not a racist hickabilly. And I’m not all that elderly as long as you’re comparing me to someone like Santa Claus.

I love the arts, baseball, my family, apple pie, philosophical conversation and politicians more apt to build bridges than walls. I love that my town produced both Fred Rogers and Arnold Palmer, the latter a Tin Lizzy regular.

And I love the Tin Lizzy.

To my left is Buck Pawlosky, the man who’s owned the historic Tin Lizzy since 1982. He’s one of the world’s greatest guys — and I’m not just saying that because he could on a whim send me home in tears by announcing he’s turning my 3rd floor office into the neighborhood Hookah Hut.

And even if he wasn’t a great guy, he oversees three great bars and a kitchen that never disappoints.

Spending one night in the Tin Lizzy is like spending one day on Pittsburgh’s South Side.

There’s the basement Rathskeller, the Main Street bar and Flappers. On a really good night I’ll hit all three.

Each bar is unique, each has something special to offer.

So the Tin Lizzy bars are like the people who drink here.

Sure, there’s a racist hickabilly here and there, but I’m not going to let their knuckle-headed ignorance spoil my tavern time.

As I’ve always said, if I confined my conversation to purely enlightened and sophisticated folk mine would be a very lonely existence and I’d have to stop talking even to myself.

Many of the people who are opposed to building physical walls along the Mexican border are more than happy to construct truly ugly mental ones between themselves and the neighbors they see every day.

Some of my friends were surprised I didn’t talk to reporter Kevin Zwick. Honest, I didn’t even see him or the photographer snapping pictures.

Had Zwick asked me for insights, I would have wisely told him all the ways I used to finesse the Tribune-Review expense account when I had his job and was given an assignment involving talking to bar patrons.

But if he’d have asked me what it was like to be a liberal in the land of Trump, I’d have said I’d prefer it to being stuck on a bus with a bunch of New England Patriot fans.

I foresee Trump either getting bored or overwhelmed when his evident neediness to be adored goes unfulfilled. Or maybe congressional Republicans will assert themselves when they sense future endangerment.

Or not. I’m no fortune teller.

Until then, I’ll be happy here at the Tin Lizzy, now emboldened by an artful comparison a Facebook friend posted after seeing the story.

“I imagine you’re like Marlow, the protagonist in Joseph Conrad’s ‘Heart of Darkness,’” John K. wrote. “He’s an intellectual, philosophical and world-weary guy who goes deep into Africa and encounters Col. Kurtz, a European who has set up his own Kingdom of sorts among the natives. As Kurtz recalls the terrible things he's seen and done while living among the indigenous people he utters,'The horror, the horror.'”

“Your forays deep into the heart of Youngstown calls to mind Marlow's own journey.”

“Apcalypse Now,” is based on “Heart of Darkness.”

So come visit. I’ll introduce you to Buck and some of our friends. We’ll have a great time, I promise.

Some mornings, I’m the first one here at 6:30 a.m. It feels like a privilege to be entrusted with the keys to a place so fun and interesting.

And I love the smell of taverns in the morning.

I’m loving cornhole! Who wants to join me?

Is The Tin Lizzy haunted?